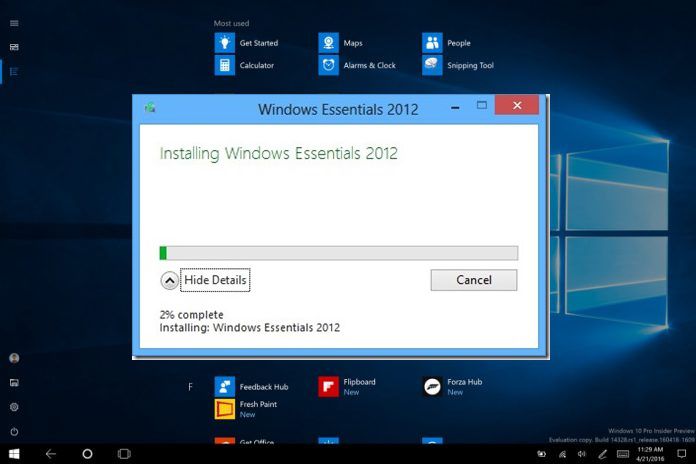 This fall, Microsoft confirmed that it will be closing down its Windows Essentials suite of apps. We knew the shuttering would happen in January, but now the date has been set and Windows Essentials will cease to exist on January 10, 2017.

At the moment, it is possible to download the Essentials suite. Of course, that will undoubtedly change next month when the closing date passes.

Microsoft believes that it has adequate replacements for the apps that made up Windows Essentials. We are not sure about that as many Windows 10 replacements still feel incomplete. However, with the way users download apps, offering all services in a single suite is now unnecessary.

Windows Essentials has been around since the days of Windows XP. It was announced in August 2006 with applications that Microsoft thought would appeal to most users. By time Windows 7 had rolled around, Essentials had a large number of apps.

Some of the most familiar apps for the suite include Windows Live Messenger, Mail, Photo Gallery, Movie Maker, Writer, Family Safety, Mesh, and Messenger Companion. These free tools were, for the most part, excellent applications.

Some of the apps in Essentials will be moved to the Windows Store, like Movie Maker. Now that many of Microsoft’s apps also cross to mobile devices, allowing them to be downloaded individually make more sense.

While the reasons for closing Essentials seem understandable, the real question is whether Microsoft has sufficient replacement apps?

Photos for example, the Windows 10 application that effectively replaces Photo Gallery. While the Windows Essential app is a powerful photo editing and organizing app, Photos feels unfinished. Microsoft continues to improve Photos on Windows 10, but it is not as good as Photo Gallery.

Movie Maker would be a huge miss if it is killed off alongside Essentials. Microsoft has said that it has plans to bring the powerful video editing application to the Windows Store. We certainly hope that is the case.

We are sure those of a certain vintage will remember the good old days of Windows Messenger, or MSN Messenger as it once was. That has since been replaced by Skype, which offers many more features in keeping with advancements in the sector. However, call us nostalgic, but we think Messenger was a better service than the often frustrating Skype.