We have previously discussed the final throes of Flash as the dominant language for web. The leading web browsers are turning their back on Flash in favor of HTML5. Microsoft is the latest to confirm that it is killing off Flash on its Edge web browser for Windows 10.

This is not happening yet, however. The company says that its next release of Windows 10 will automatically default to HTML5. Microsoft points out this will happen when it is possible. In other words, Flash will not be killed entirely and will be available on sites that need it.

However, by default Flash will be disabled across Edge. If a site does require it, the user can choose to load Flash on the specific site. The company says on its Windows Blog that this will improve performance, battery life, and security. 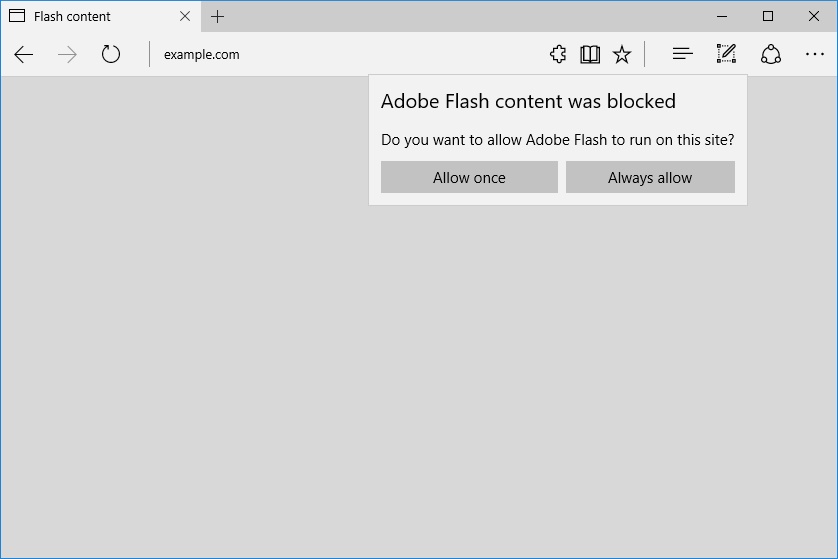 Microsoft explains that the biggest sites or most modern sites will not be affected. The company explained its reasoning and states it is committed to forwarding HTML5 development.

“We are deeply aware that Flash is an integral part of many web experiences today. To ease the transition to HTML5, these changes initially will not affect the most popular sites which rely on Flash today. In the coming months, we will actively monitor Flash consumption in Microsoft Edge and will gradually shorten the list of automatic exceptions. At the end of this process, users will remain in control, and will be able to choose Flash for any site they visit.”

In its post, the company does not detail exactly when the change will be made. However, the next Windows Insider Program preview for Windows 10 will let Insiders preview the ability in Edge.

Microsoft is not the first company to bring the axe down on Flash. Google announced that it will cut all Flash support in Chrome by this month.

While tipping a hat to the obvious role the prgramming language played in browser growth, Google is waving goodbye.  Chrome 53 has been actively blocking since September. This month, HTML5 will be the default standard platform for browsing in Chrome 55.

Some websites are still wholly reliant on Flash. Like Microsoft, Google says users can manually activate Flash if a site specifically needs it. However, like Microsoft, the company is urging developers to update their websites to HTML5.

In killing off Flash, Google says users will get a better experience while browsing:

“HTML5 is much lighter and faster, and publishers are switching over to speed up page loading and save you more battery life. You’ll see an improvement in responsiveness and efficiency for many sites.”