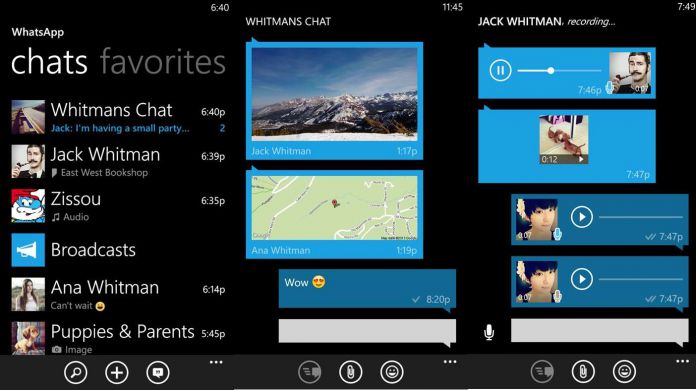 WhatsApp has sent out a new update for its Windows Phone application. The new release brings the service up to version 2.16.300. This is a follow-up to recent beta updates, so there are a bunch of features coming to the app from those builds.

Chief among the new additions is support for two-step verification. Other features included in WhatsApp 2.16.300 are storage capacity information, a new video-to-GIF button, and performance improvements.

Windows Phone users now get free video calling. This allows face-to-face chats to any other WhatsApp users around the world. The company points out that for this feature users will need Windows Phone 8.1 of newer.

The video calling feature was added in an update that rolled out a week ago. WhatsApp build 2.16.288 also added the ability to draw on pictures. Snapchat users will be familiar with this ability. Users can also place emoticons and add text to images before sending them.

While many major companies and developers have not shown much love to Windows Phone, WhatsApp has. The company has kept the service very up to date on the platform, even compared to rival systems like Android and iOS.

WhatsApp has debuted a number of new features to Windows during the year. Document sharing was introduced on Windows Phone and then brought to the Windows 10 beta app. The feature gives users the ability to send office documents within a message field.

Last month, the company also sent out the ability to send GIFs in the beta version of the app. Users can send GIF messages via the video sending page. Any video sent in this way will become a looping animation without sounds.