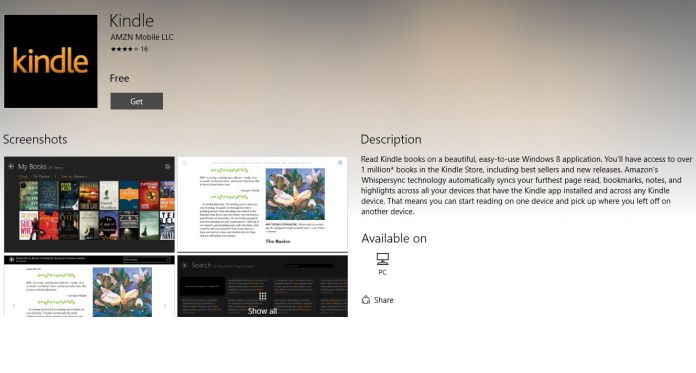 Amazon has announced that it is pulling the plug on its Kindle app for Windows. The app will be removed from the Windows Store on October 27. The online retailer has not said anything about its Windows phone application.

Microsoft’s Windows 10 platform does a lot of things right. However, many users still accuse the OS of not having enough apps. It is something we find confusing considering a PC does not necessarily need applications to achieve higher functionality.

The company has worked hard to address the balance of apps. Yet, big name developers, like Amazon, and even smaller dev’s are reluctant to work with the platform. Microsoft is hoping that will change through the Universal Windows Platform (UWP). The problem is, for every step in the right direction there is a step back.

If you do not use Amazon then this may not seem like a step back. But the truth is, this is another major company, developer, and user portal that has jumped ship from Windows. It is worth mentioning that the company is pulling out of Windows 10 entirely, and not just the mobile platform.

This is largely due to the fact Amazon has never been on board with UWP. The company’s current Kindle app is still running back on the old Windows 8 application. It has an aging UI and it is not really much of a surprise to see it finally pulled altogether.

The company says that it has been supporting two apps on Windows, including the Kindle for PC app. That Win32 service will remain active and Amazon says that will be the focus of its efforts moving forward.

“For the past few years Amazon has supported two separate Kindle apps for Windows PCs. In order to provide our Windows customers with the best Kindle reading experience, we are simplifying our approach and focusing our efforts on the Kindle for PC app.

If you are currently using our other Windows app (Kindle for Windows 8) on one or more of your PCs, we recommend that you upgrade to the Kindle for PC app to get the best reading experience and latest Kindle features. We are regularly updating the Kindle for PC app, including recent features like multi-color highlighting, improved search performance, and support for textbooks.

As mentioned, Amazon has not been moved by Microsoft’s UWP plans. The company has generally treated its Windows apps poorly across the board. Back in August we reported on the company’s “new” Windows 10 application. The app is a rather shoddy front end to the company’s website and nothing more.

This leaves questions over the future of the Kindle app for Windows phone. We assume Amazon will not update it to UWP, so will it also be pulled? We reached out to the company to find out, and will let you know.