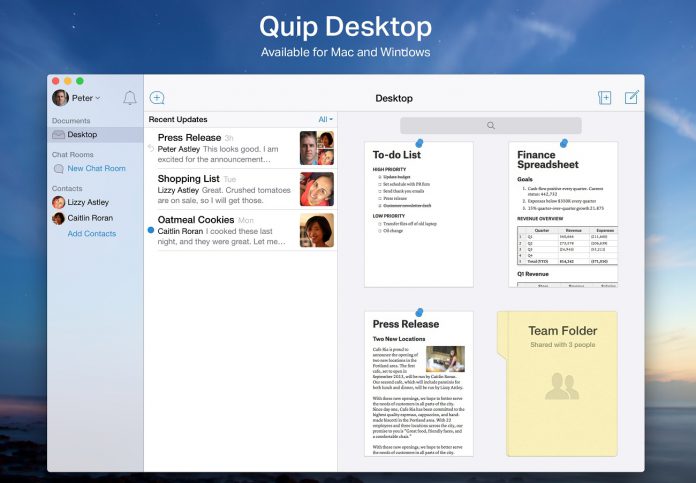 Salesforce consoled itself on missing out on LinkedIn to Microsoft by splashing $750 million on Quip. The purchase was a piece of an ongoing narrative that is seeing Microsoft’s relations with Salesforce crumbling. Quip has now been updated to integrated in Salesforce products, a move that put crosshairs on Microsoft’s services.

Quip offers users a single space to do all of their editing, creation, and organizing. This is opposed to the Office model of offering different apps for documents, email, and other functions. Quip is also social oriented, including a Chat feature in each document and spreadsheet.

The latest update lets customers create and edit documents directly within Salesforce products. Users can also link Quip spreadsheets. In other words, Salesforce now has a built in Office (Word and Excel) alternative in all of its products.

“All this free-form, brainstorming and knowledge, could be attached to the database record in Salesforce…It really means Salesforce could be that source of truth,” Quip CEO Bret Taylor said in a press briefing last week.

Earlier in the year, Microsoft and Salesforce were going through a honeymoon period. The two companies had agreed to collaborate more frequently a couple of years ago. Through the partnership, 10 services were released with integrated Salesforce/Microsoft products.

Microsoft’s $26 billion acquisition of LinkedIn changed the relationship, though. Salesforce was a rival bidder for the enterprise social network. The process had seemed amicable enough, but Salesforce has since questioned Microsoft’s motives in handling LinkedIn user’s data. As we mentioned yesterday, Microsoft issued a strong rebuttal.

While LinkedIn brought cracks to the collaboration, the Quip acquisition could break it permanently. Salesforce is now able to integrate Office-like services into its own products. Microsoft is unlikely to be pleased with this development and a CRM SaaS war is definitely brewing.

Salesforce is digging in to fight after recently losing its long-standing position as the number one SaaS CRM provider to Microsoft. The integration of Quip shows that, partners in some things, these two companies are rivals before anything else.