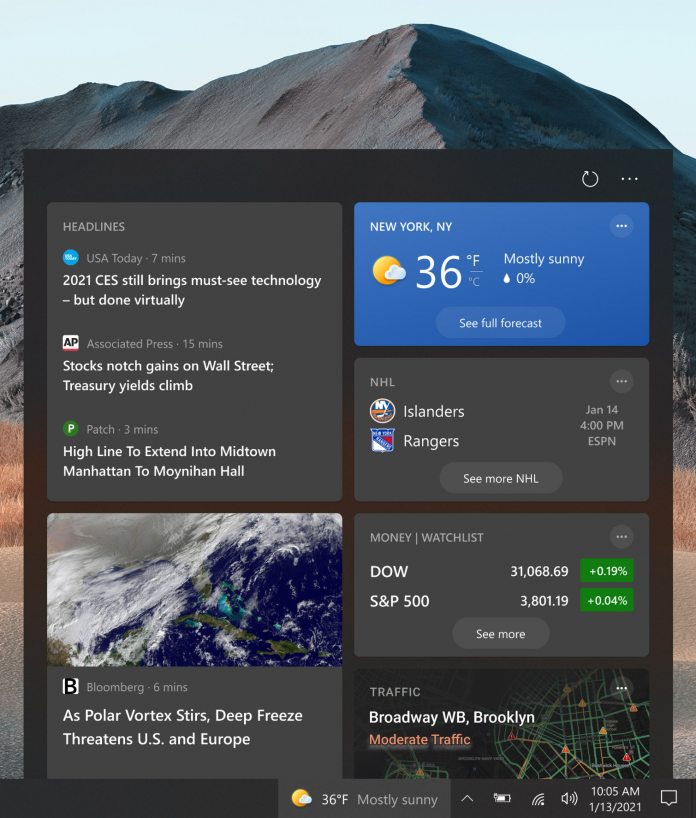 We already know Microsoft is working on bringing a News and Interests integration to Windows 10, creating a new widget concept in the process. That tool has been testing for Windows 10 21H2 in preview over recent months and will go live when that major update is released this fall.

However, Microsoft is also now bringing the News and Interests to older Windows 10 versions. In the latest Beta and Release Preview updates on the Insider Program, Microsoft is rolling out the widget to Windows 10 21H1, 20H2, and version 2004.

The new tool will be located on the taskbar and will create a ticker showing information such as stocks, news, and weather. Users can get a quick view of information while working in another app without needing to open the Start menu or access a browser.

Clicking the News and Features taskbar icon will expand the widget a proper News Feed. Users can then personalize the content they see and get information such as headlines, weather, and sports news. As you may expect, Microsoft is tapping into its own Microsoft News to curate the content.

Microsoft News will surface news from over 4,500 sources. Because Microsoft News largely uses AI to curate content for users these days, the new feed will learn what stories your read and dismiss. Once it understands your tastes, it will tailor content specifically towards you.

It seems News and Features in Windows 10 is part of Microsoft wanting to bring Floating Gadgets back to the platform. These were cool parts of the otherwise not so good Windows Vista from over a decade ago. Alongside the News gadget, Microsoft is also adding a floating search bar for the desktop.

In terms of the floating search, it obviously taps into Microsoft Bing to surface search results. Importantly, gadgets are a way to entice Windows 10 users to browse with the native Chromium Edge app instead of an alternative like Chrome or Firefox.

“We are rolling out news and interests on the Windows taskbar to Beta and Release Preview rings. This has been available in the Dev Channel, with on-going improvements based on Insider feedback. News and interests on the taskbar make it easy to stay up to date with information at a glance, and we look forward to hearing what you think.”