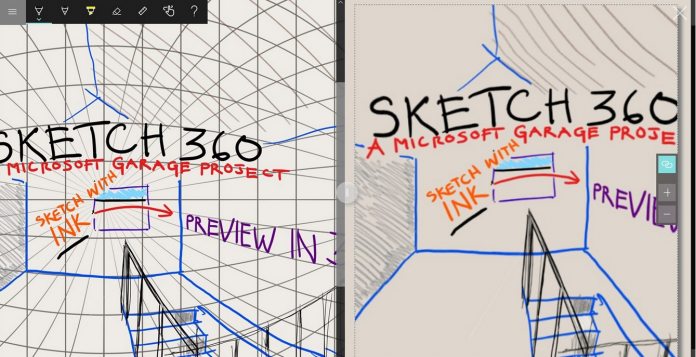 While the Microsoft Garage division can be hit and miss with successes, when a new idea lands it’s usually a good one. We can file Sketch 360 under Microsoft Garage wins. This is a design app that has been relatively popular on Windows 10. Now, Microsoft is bringing the tool to the new Surface Duo smartphone.

As you may guess from the name, Sketch 360 is a digital design tool that allows users to quickly take notes of ideas for 3D spaces. The app takes those drawings and projects them inside a sphere, with the user in the center. In this space, users can test concepts before heading to a full model.

Microsoft’s Michael Scherotter, who developed the app as a “passion project” confirmed its availability on the Google Play Store. Below is the company’s description of the app:

“Whether you are an architect, a VR designer, an urban sketcher, a 3D game designer or a 360 video producer, you can easily construct an accurate sketch from a single viewpoint that’s easily shareable online using Sketch 360.”

This has been my "passion project" over the past couple of years and the Microsoft Garage helped me publish it first to the Windows Store and now to Google Play – where I optimized it to work on the new Microsoft Surface Duo.https://t.co/b10r4DmTFt

Of course, the dual screens of the Surface Duo make it a perfect device for apps like this. Microsoft says Sketch 360 is fully optimized for its new Android smartphone. This means it reads the pressure-sensitive Surface Pen as it would on a touch-screen laptop.

More interestingly, the app will also function on any other Android smartphone. Users can download Sketch 360 for Surface Duo on Android at the Google Play Store here.

Microsoft has been shipping the Surface Duo smartphone since earlier this month, although only to customers in the United States. Reviews have been mixed for the $1,399 handset, with most agreeing it’s amazing hardware, average performance, and very much a first-gen product.