As expected, Microsoft has officially announced the Surface Duo smartphone. The company says the new Android dual-screen smartphone will start shipping on September 10 and will cost $1,399. It is available for pre-orders starting today.

Alongside confirmation of its launch, Microsoft gave the full specs for the Surface Duo as well as other details.

Firstly, that cost is something that will divide opinion. It seems the Surface Duo is competitively priced, as crazy as that sounds when discussing a smartphone that costs well north of $1,000. However, the reality of the flagship market is the leading handsets like the iPhone 11 Pro and the Samsung Galaxy S20 already cost over $1,000.

It is arguable the Surface Duo is in a category above these smartphones. Microsoft’s device is pitched as a bleeding edge product in the vein of the Samsung Galaxy Fold 2, which costs $1,780 at its base. How you see the price of the Duo will depend on how you view the astronomical costs of smartphone flagships.

What is clear is Microsoft is not being an outlier either way. Of course, we’ll wait for the reviews to speculate on whether the handset can live up to its cost.

Per a promise Microsoft made a year ago, the Surface Duo arrives as a flagship. Or, at least close enough to one to not make much difference. It is powered by Qualcomm’s Snapdragon 855 CPU paired with 6GB of RAM. That’s not cutting-edge performance, but it should be a powerful smartphone. One caveat will be how the CPU and RAM handle Android over two screens.

Elsewhere, the Duo gets a pair of 1800 x 1350 AMOLED displays, with 100% SRGB and DCI-PR color accuracy. Pixel density is a solid but unspectacular 401 and make up what Microsoft calls “PixelSense Fusion Displays”. More than just slapping a fancy name to sound good, Redmond says the screens will display identical images so content does not look different across both.

Camera was a big point of interest during the near 1-year wait for the Duo to launch. We now know the device ships with just the one 11MP lens that will offer 4K video recording. Again, this will be solid but it’s clear camera tech is an area Microsoft has put little focus. That could be telling considering how much value consumers put on their camera. 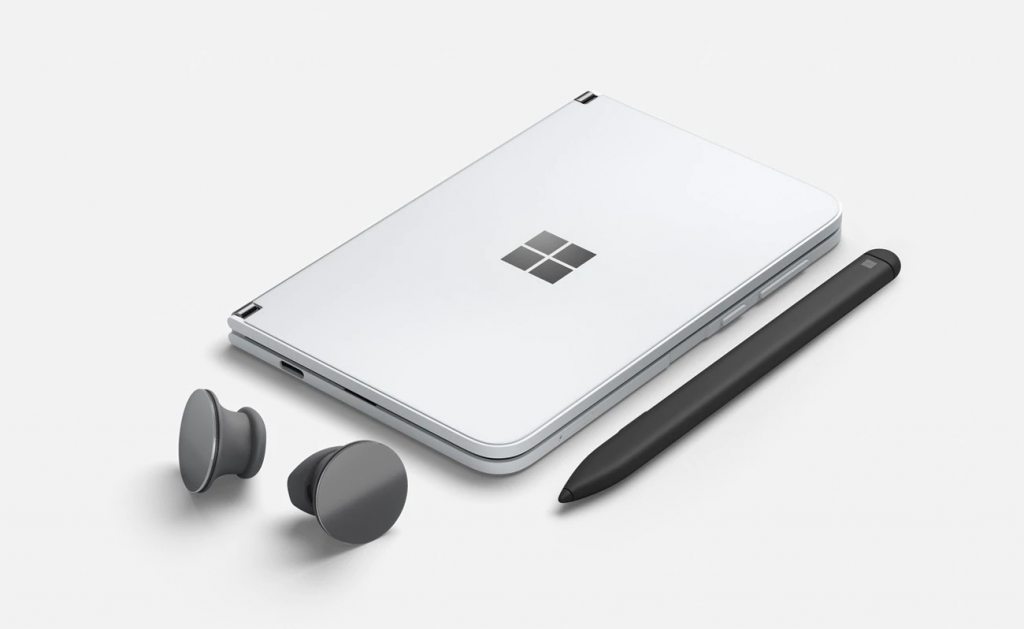 Certainly, the single lens arrangement means the Duo won’t be mentioned in the same sentence of other flagships, not least the iPhone or Pixel devices. The lens is also another area that shows the Duo is primarily a business smartphone.

Finally, Microsoft says the Surface Duo supports the complete Your Phone experience out of the box. If you’re unfamiliar with Your Phone, it is a service that links Android devices to Windows 10 for a device mirroring experience.

“When we created Surface seven years ago, we wanted to challenge convention by redefining expectations for what a productivity device should be, and what it should do. Put simply; we wanted to help people get things done. We didn’t set out to combine two existing devices – the tablet and the laptop. We had a vision for how we could take the best elements of each to create something entirely new. To find that perfect intersection of hardware and software that unlocks a more intuitive way to work and create. We faced some skepticism, but ultimately a new category was born that drove growth for the PC industry. More than that, behaviors started to change. People’s eyes were opened to the idea that touch shouldn’t be just for tablets and phones. And the ability to get things done shouldn’t be limited to just when you were sitting in front of a traditional PC.”

“Today, as we look ahead to the next wave of mobile productivity and creativity, we see that same opportunity to create something new with Surface Duo – not to reinvent the phone, but to inspire people to rethink how they want to use the device in their pocket. Available for preorder in the US starting today, Surface Duo brings together the power of Microsoft 365 experiences and the full ecosystem of Android mobile apps into one device, with two screens that you can take anywhere.”