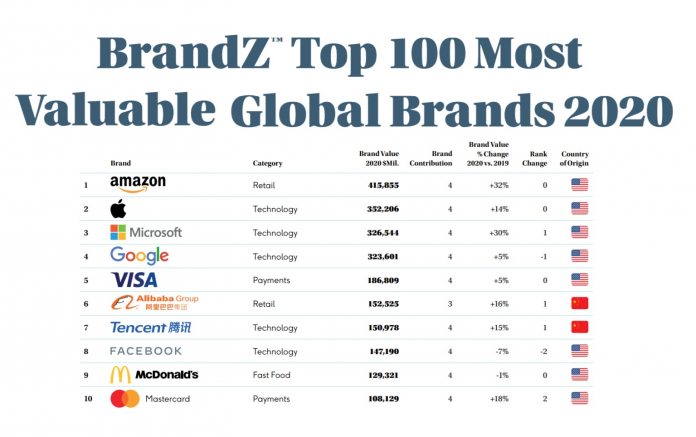 Analyst firm BrandZ has published its Top 10 Most Valuable Global Brands 2020 study. It’s good news this year for Microsoft has it has moved into third position, overtaking Google after years of sitting behind the company.

However, Microsoft still sits behind Apple in second place and Amazon in first place. However, this is further proof of Microsoft’s recent success. In the BrandZ study, it has taken several years for Redmond to surpass Google.

In fact, Google is something of an outlier amongst its main tech competitors. Microsoft, Amazon, and Apple have a brand and product synergy. Apple’s brand is largely built on the iPhone, Amazon on its web store and AWS, and Microsoft on Windows, Office, and Azure.

Google is something different as the brand itself is arguably is most valuable asset. In other words, the name Google is more important to consumers than any individual service the company provides.

As we have seen through a turbulent 2020, Microsoft has been able to weather the COVID-19 crisis better than most. Alongside increasing its brand value according to BrandZ, the company has also continued to record bumper financials amid the lockdown.

“Corporate cultural change, open systems, and the growth of its cloud business helped generate a 30 percent increase in value for Microsoft that pushed the brand up one slot in the ranking to No. 3, just after Apple, swapping places with Google, which was impacted by declining ad revenue related to Covid-19.”

While Amazon and Apple were fellow trillion-dollar companies alongside Microsoft last year, 2020 has seen a change. In fact, Microsoft was the only company to keep its trillion-dollar market value after the COVID-19 pandemic started.