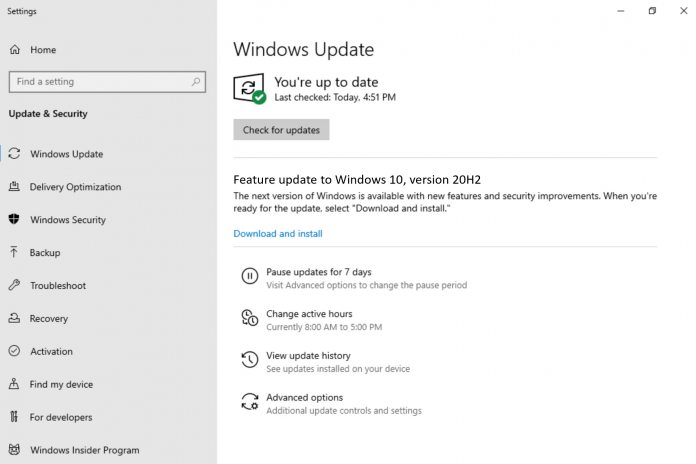 Microsoft has announced Windows 10 20H2, which is the next major update for its platform. We have known about this update for some time as Microsoft has been previewing it on the Windows Insider Program for months. However, the company has now officialized the update.

As we reported earlier this year, Windows 10 20H2 could arrive as a minor update. Microsoft has yet to confirm this is the case but has hinted the next update won’t have many features. We do know the company has already experimented with a new update schedule last year.

Microsoft announced last year a dramatic change to its update schedule. The company said it will reduce main feature updates to once a year. Microsoft quickly changed its mind after customers reacted negatively to the proposal.

Interestingly, Microsoft is also exploring the idea of individual feature updates for Windows 10. Of course, several features are currently being previewed on the Insider Program. If Windows 10 20H2 is a minor release, those features will likely roll over to the 21H1 cycle.

It is also worth noting that Microsoft planned fall release for Windows 10 will bring a change to version numbers.

Like previous second half of the year Windows updates, Windows 10 20H2 should drop for all users in October. That means it will probably be finalized in September. Normally that would mean the version number 2009, denoting the year (20) and month (09) of release.

However, with the upcoming release Microsoft will use the codename as the version number. In other words, Windows 10 20H2 will also be Windows 10 version 20H2.