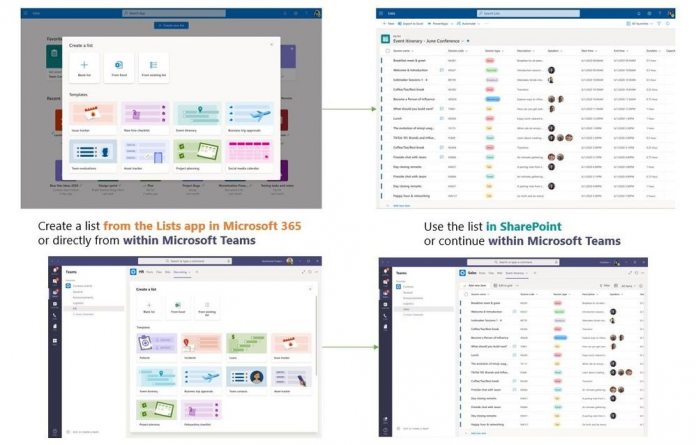 During Build 2020 last week, Microsoft made numerus announcements around Azure and Windows. However, there were a number of reveals that flew under the radar at the virtual developer conference. One of those was Microsoft Lists, a tool that could enhance Microsoft’s position in the enterprise collaboration space.

Lists is another example of Microsoft fleshing out its workplace tools to provide organizations with a one-stop shop for inter-organization collaboration tools. However, while the company has largely built on current market leaders – such as the success of Microsoft Teams after basing the service heavily on Slack – Microsoft Lists is different.

Microsoft is not building on a current market leader with Lists, but is instead entering a space that I ready for expansion without a clear leader.

Microsoft Lists uses a grid-based user interface comprised or rows and columns similar to spreadsheet applications like Excel. It aims to allow organization to collaborate and manage tasks. Sure, Microsoft To-Do already does that, but Lists Microsoft is tying the service to OneDrive and SharePoint to promote flexibility across a business.

“Microsoft Lists is a Microsoft 365 app that helps you track information and organize your work. Lists are simple, smart, and flexible, so you can stay on top of what matters most to your team. Track issues, assets, routines, contacts, inventory and more using customizable views and smart rules and alerts to keep everyone in sync. With ready-made templates, you can quickly start lists online, on our new mobile app, and directly from within Microsoft Teams.”

It is worth noting Microsoft Lists is not alone in this space. Apps such as AirTable provide task management tools on an enterprise scale. However, Lists can enter the market as an instant side-by-side competitor.

Whereas Teams was trailing Slack for sometime before surpassing its rival, Lists could launch as the market leader. Sure, it won’t be as mature as its rivals, but Microsoft’s integration with Office 365 (including Teams) will make it inherently flexible and usable in organizations that already use Microsoft services.