Last October, Microsoft announced the Surface Duo, a double-screen Android smartphone that will launch later this year. Whether the Duo is the much-discussed Surface Phone or not, it means Microsoft is back in the smartphone game. As such, we expect to see more Surface handsets arrive in the future.

A recently published Microsoft Patent points to a potential successor or stablemate of the Surface Duo. However, unlike the two screens of the Duo, this new Surface Phone would have three displays.

Found by Windows Latest, the patent describes a smartphone that looks like the Surface Duo but has a thin third display between the two larger displays. If the Duo looks like a book form factor, this third screen would look like the spine of that book and sit on the hinge. 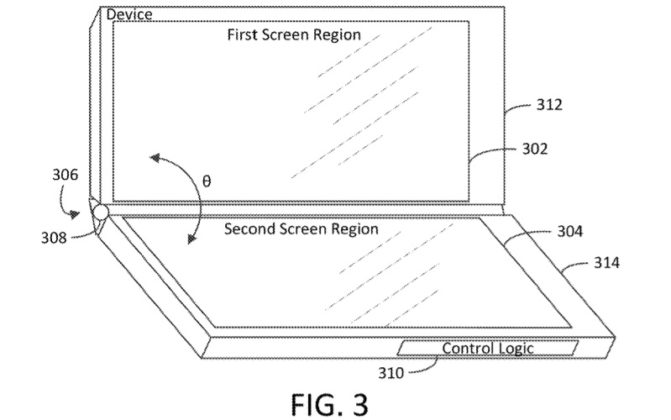 Microsoft says the third display could protrude from the device and show details similar to Samsung’s Edge screens.

“In a first implementation of the first aspect of the example device, the determination logic is configured to determine one or more virtual controls to be displayed on the third screen region based at least in part on the hinge angle being greater than zero degrees and less than 180 degrees.

It is worth noting that Microsoft does not specifically say this patent is for a Surface Phone. In fact, the company points out the tech would work on any Surface product. The patent reads:

“The mobile device 1400 may be any of a variety of computing devices (e.g., cell phone, smartphone, handheld computer, Personal Digital Assistant (PDA), etc.) and may allow wireless two-way communications with one or more mobile communications networks 1404, such as a cellular or satellite network, or with a local area or wide area network. (Emphasis added).”