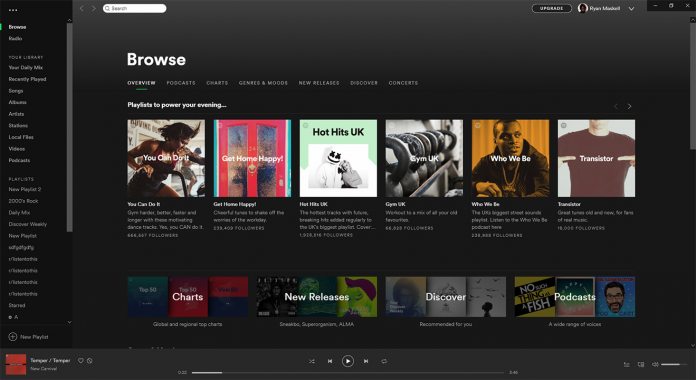 While most people use Spotify on their mobile device, the music streaming giant maintains are rather excellent Windows 10 desktop experience. However, it does not have some of the functionality of the mobile app.

Specifically, Spotify on Windows 10 does not display lyrics for songs you’re listening to. Users have long wanted the app to introduce this feature and it seems Spotify is listening.

According to MSPowerUser, Spotify has started teasing the introduction of song lyrics on its desktop app. One reader sent a screenshot that promises “some big improvements to our lyrics feature“.

It seems Spotify has been internally testing the feature and will soon allow lyrics to be displayed when a song is playing on desktop. While it has not been confirmed, MusicMatch is believed to have partnered to deliver the lyrics.

MusicMatch is a service where users can submit lyrics to songs, while artists can also include entires.

If you don’t have Spotify on Windows 10, you can download it from the Microsoft Store here.

Earlier this month, we reported on Spotify’s plans to create its own integrated personal assistant.

App researcher Jane Manchun Wong discovered information that shows the app will support voice activation. Users will be able to start voice commands by opening with “Hey Spotify”. Unfortunately, it seems the tool will only work when the app opens.

It is worth noting Spotify’s music streaming rivals already have their own integrated voice commands. Pandora allows users to manage the app through voice, as does Apple Music by leveraging Siri.