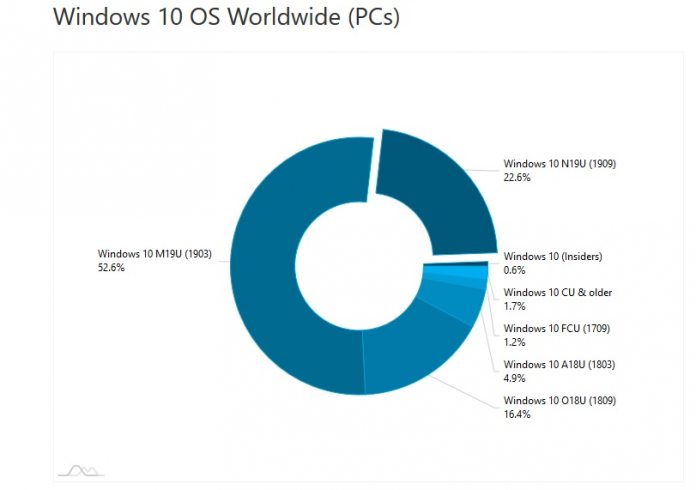 Windows 10 is viewed by Microsoft as an evolving ecosystem that improves through regular feature updates. When a platform moves through many of these phases of updates and changes, there is a risk it can become fragmented. According to the latest data from AdDuplex, Microsoft continues to do a solid job at moving users to newer builds.

That’s not to say it’s a perfectly unfragmented ecosystem. However, in its February 2020 Windows 10 report, AdDuplex shows market share for the last major release (v1909) has dramatically increased.

Microsoft has consistently talked up the need for users to keep up to date with Windows updates. The company only supports builds for two years so rolling to newer versions is important for security and features.

As we look ahead to the release of Windows 10 2004 this May, there should be a significant migration to v1909 happening in the interim months. Most organizations and powerusers avoid updates when they are just launched so we should see more people willing to take the upgrade now.

It is also worth remembering that Windows 7 support ended in January so a sea of users will be upgrading to Windows 10.

When discussing AdDuplex data, it is important to acknowledge how the company gathers information. The company does not provide a complete overview across the Windows platform. Instead, AdDuplex studies Windows Store app data from applications that run the AdDuplex SDK. There are about 5,000 apps with the SDK.

While this is far below the total number of apps in the store, it presents a solid representation of the state of Windows.