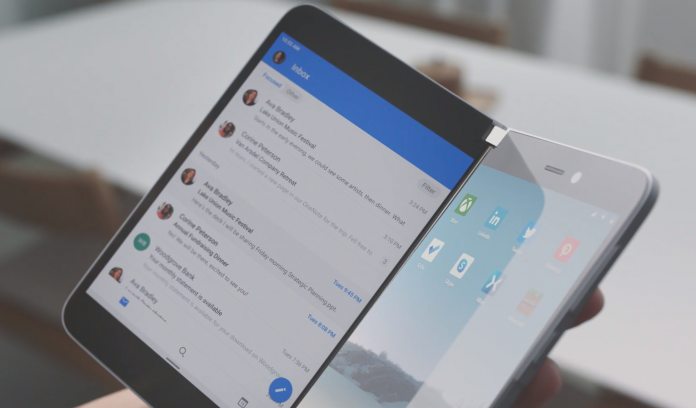 At its Surface event last October, Microsoft dropped a hardware surprise. The company announced the Surface Duo, it’s first smartphone in several years. Furthermore, the device is based on Android, becoming Microsoft’s first hardware foray into the platform.

However, the Surface Duo shown on stage was a prototype. It was literally not the finished article as Microsoft will not launch the device until holiday season this year. Indeed, the company is still developing both the software and hardware of the Duo.

It is unclear how many prototypes were made, but the device was only available to select journalists to view. That makes it all the more interesting that a Surface Duo has been spotted in the wild on Vancouver’s SkyTrain.

As you can see in the image, it seems as though the hardware is the same as the device Microsoft showed on stage. Some commenters suggest the device in the wild has a front facing camera, but it’s hard to tell.

In the accompanying video, you can also see how the Android UI functions across the dual screens of the Duo. For example, a game running is running on one of the displays while the user uses the other screen to enter Outlook for Android.

Sure, the software still looks unfinished, but it clearly shows how the Duo will function.

For example, we also get a look at how the Surface Duo handles apps running across both screens. It is worth noting developers won’t include this ability in their apps. Instead, users of the device will be able to choose to spread the app across both screens with “extended canvas” mode.

So, what’s the story with this leak? Well, Microsoft is believed to have given Surface Duo phones to developers early. We guess this is for long-time major partners. Still, we guess Redmond won’t be pleased that this leak has happened.