This is a big week for Microsoft’s Chromium Edge browser. The full version of the new browser became widely available yesterday (Jan. 15) and now there is some good news for Beta channel testers. Specifically, support for ARM64 devices is now available on the more stable preview branch.

That means ARM64 support for the full Chromium Edge built that launched yesterday is a step closer.

In November 2019, Microsoft introduced ARM support for the browser on the Canary channel. The company followed up a month later and moved ARM support to the Dev channel. Now its on Beta, the support is just one step away from a full release.

If you’re unfamiliar, the Chromium Edge preview has three channels: Canary for unstable builds, Dev for more feature releases, and Beta for stable previews. Considering Microsoft has seemingly moved ARM up a channel each month, could we support on the release branch next month?

As you may know, the ability for Chromium Edge to support native ARM64 is important. Firstly, it will bring the browser in line with its main rivals (although, not Chrome), but it will also ensure better performance for people with ARM-based hardware.

At the moment, the full release of Edge must run an x86 app through an emulator. While that’s not rare per se (apps do it), for a browser it means making the experience slower. Because of constantly generated real-time code, the cache can become overrun when pushing an app through emulation.

Of the major web browsers, only Mozilla’s Firefox supports native ARM64. Sure, the Microsoft Edge browser does too, but that is now considered a legacy service and has been replaced by Chromium Edge.

Google Chrome apparently has ARM64 builds ready to go, but Google has held back on an official release. 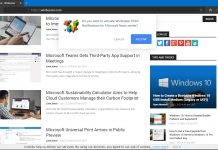