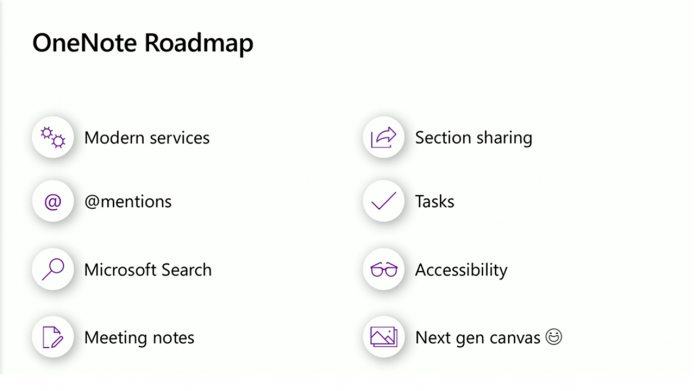 Microsoft took the wraps off the upcoming OneNote features at its Ignite 2019 conference. It comes with welcome news for many, who were concerned about the future of the UWP app after a re-commitment to OneNote 2016.

It now seems Microsoft is planning to merge its modern code back into the legacy 2016 codebase. The two will be merged to create a single codebase from OneNote builds will ship from.

As well as this, the company is planning several major feature additions in the next year and a half. One thing it’s promising is faster notebook sync thanks to modern sync services. It’ll also be adding @mention support via Microsoft Teams.

For discovering content without an @mentions, there will be Microsoft Search integration. This will help users find all of the information in their notes and generally be much more advanced.

Meanwhile, new features are coming for meeting notes, possibly leveraging information in Exchange such as who’s attending, and better meshing with Microsoft Teams. Speaking of integration, Microsoft To-Do will be coming to OneNote for enhanced task management sometime next year. The app will also get a “next-gen canvas” and improved accessibility. You’ll also be able to finally share just a section of your notebook, rather than the whole thing.

Notably, the codebase changes will include a move to Microsoft’s new Fluid Framework, which extends multi-person collaboration tools and easily plugs into AI and other services.

“We are working very closely with the Fluid engineering team to co-develop the Fluid Framework and that sometime next year we’ll be debuting a preview of what OneNote in Fluid will look like together and what they’ll be capable of together,” said OneNote product manager Ben Hodes. “Ladies and gentlemen, this is the future of OneNote.”

Going forward, there will be a separate Desktop and Windows 10 app for OneNote, with OneNote 2016 installed with Office 365 by default in March. OneNote 2016 support dates will also now match Office 2019.