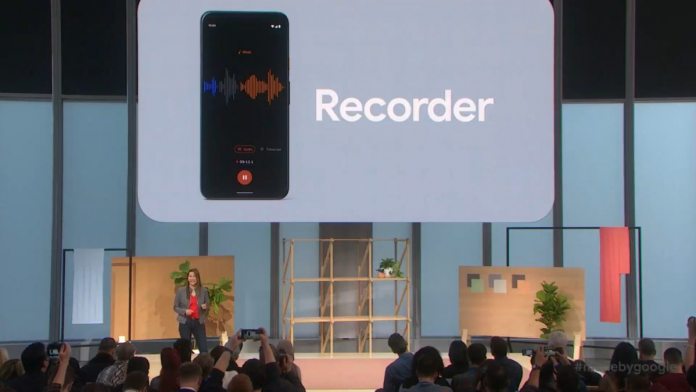 At Made by Google today, the company launched its Pixel 4 smartphone flagship. While the handset features market leading performance, screen, and cameras, one of the most interesting aspects is an accompanying app. Called Google Recorder, the app transcribes spoken words in real-time without using third-party tools.

And yes, by third party tools we also mean the internet because Recorder and transcribe offline. During its event, Google showed how the app works on the Pixel 4 even if airplane mode is turned on. We have seen companies like Microsoft develop real-time transcribing tools, but Google Recorder seems a level above.

When speech has been transcribed, the content can be saved in audio format or as a text file. These saved files can be access by users who can search the contents for words. This means users can directly search for spoke words. For example, searching “WinBuzzer” would surface any audio instances where “WinBuzzer” is mentioned in a file.

Furthermore, Recorder will show where the word appears in the file to allow smoother editing. Google points to the usefulness of the app, such as giving students the ability to transcribe lectures.

The company says Google Recorder is a Pixel 4 series exclusive. However, we wouldn’t bet against it coming to other Android devices eventually.

Like iPhone models, Google’s Pixel smartphones have not taken the Samsung and Huawei route of dazzling people with specs. Instead, the company wants to emphasize the seamless blending of hardware with the stock Android experience.

The Pixel 4 extends this ethos, not that it does not have plenty of interesting specs. The Google Pixel 4 has a 5.7-inch screen and the Pixel 4 XL has a 6.3-inch display. Both panels have a 90Hz refresh rate with the standard Pixel getting Full HD and the Pixel 4 XL scoring quad HD.

Under the hood, Qualcomm’s Snapdragon 855 processor paired with 6GB of RAM is doing the heavy lifting. Battery life should be excellent with a 2800mAh juicer on the Pixel 4 and a 3700mAh batter on the XL.

Finally, the cameras are where Pixel devices excel, and this year Google has embraced dual lenses. More specifically, we get a 12.2-megapixel, f/1.7 main camera, 16-megapixel, f/2.4 telephoto camera, and an 8-megapixel, f/2.0 front camera.