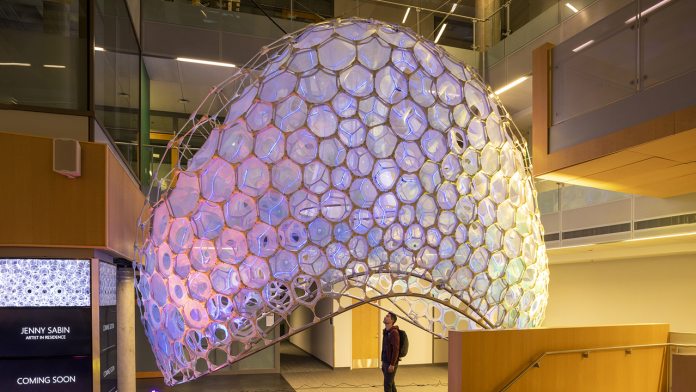 The role AI plays today is largely behind the scenes. Other than the occasional industrial robot or self-driving cars, the benefits we see are largely in opaque software features. By working with Novartis, Microsoft has created a much more visual representation of the emerging technology.

Project Ada is a giant two-story structure that inhabits building 99 on Microsoft’s campus. The AI that powers the strange glowing pavilion translates the facial expressions, noise data and voice tones of the local area into a powerful light display.

According to designer Jenny Sabin, it’s the first time an architectural structure has been driven by AI in real-time. To do so, it combines 3D printed nodes, fiberglass rods, and photoluminescent yarn to create a “living, breathing thing”.

Ada is powered by the platform of Microsoft researcher Daniel McDuff, who’s working on ways for machines to accurately sense people’s emotions. The technology could eventually be used to alert a caregiver when a patient is in trouble, for example.

In Ada, it collates audio and visual data into numbers that represent gradients of light. She may blush pink for happy, for example, or turn red when hearing anger. The anonymized data will be collected over a period of three years and be used to further improve McDuff’s model. Perhaps more importantly, it’s also a way to explore the capabilities of AI in a creative way.

“Artistry, creativity and humanity play an important role in technical innovation,” said Eric Horvitz, director of Microsoft’s research organization and chair of the company’s Aether Committee. “Jenny’s creation is an embodiment of possibilities, expectations and anxieties about the rising influences of machine learning and pattern recognition technologies that are permeating the world in interesting, beautiful – and at the same time potentially invasive and concerning – ways.”

You can find out more about Ada on Microsoft’s AI blog.