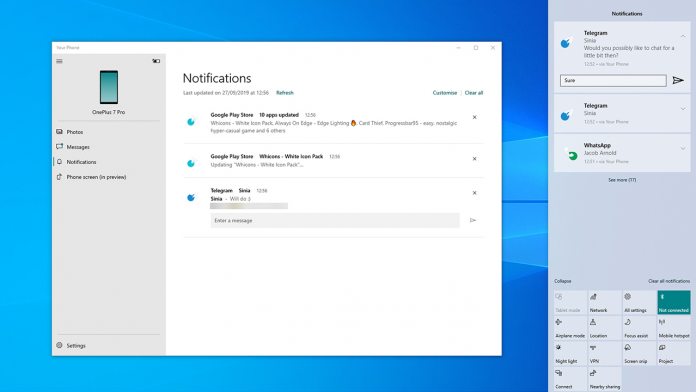 Windows Insiders have received a long-awaited feature for the Your Phone app. Following the ability to view and dismiss notifications from their PC, they can now reply to them directly.

The functionality extends both to the app and Windows’ toast notifications, which will now include a reply field. Unfortunately, Neowin reports that only replies via notification toasts appear to be working in their testing.

We can confirm that’s not the case for us. Though Your Phone did not initially show the reply button, updating the app to the latest version via the Windows Store did introduce the functionality.

Still, one disadvantage of Your Phone is that the notification functionality is just that. Though you can see the content Android pushes, you’re unable to view images without checking your device.

Though the app has a screen mirroring feature, it’s currently limited to a small number of devices, including the Samsung S line and last-generation OnePlus 6 phones. It’s not a full alternative to using your phone, then, but it’s the best Windows has had since its inception.

Your Phone even lets you customize which apps show you notifications. This will prevent notification spam from app-updates for example, and ensure non-essential tasks don’t interrupt your workflow. You can also toggle off toast notifications, but you’re unable to hide the message content when it pops on-screen.

With this major improvement out of the way, Microsoft is expected to work on call functionality. Leaker Ajith appeared to share screenshots of the feature on Twitter, revealing that it’s in testing.

For Android users, the Your Phone app goes a long way towards emulating the connected ecosystem Apple has built with its OS and device. Users can also use the app to reply to send MMS messages and sync photos.