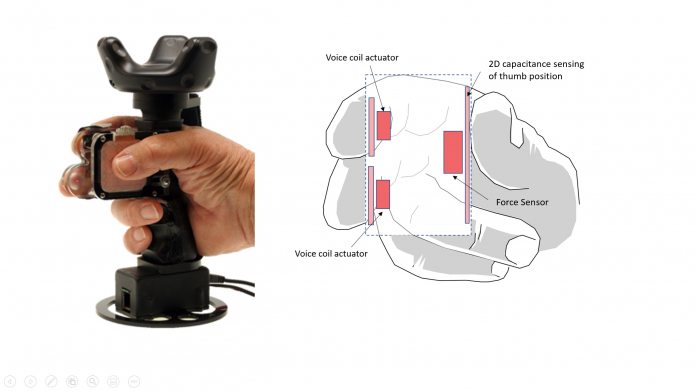 Microsoft HoloLens and Windows Mixed Reality have shown the company takes augmented and virtual reality solutions seriously. In fact, Microsoft has emerged as one of the leading developers of VR technology. In its latest, Microsoft Research has published a paper on a new haptic controller for VR called TORC.

While controllers for VR and AR headsets already exist, Microsoft Research describes a haptic pad that allows fine finger movement on virtual objects in the virtual space. Because manipulation is fine-tuned, objects are compliant.

Microsoft Research calls the system TORC (Touch Rigid Controller) is a rigid pad that has no moving parts. Instead, an array of sensors allows users to use it with visual feedback, voice coil actuators, and dexterity.

In its paper, Microsoft describes how TORC functions:

“The TORC project team enabled natural haptic interactions, such as squeezing a virtual silicone ball, by translating multisensory integration theories to the world of hardware prototypes. TORC working fundamentals rely on the fact that humans are very susceptible to dynamic visuotactile stimulation.

“When provided in the right way the force applied by the user on our device will create equivalent wide-band Voice Coil Actuation (VCA). The real-time effect within virtual reality creates the necessary proprioceptive drifts that enable different compliances for virtual objects.”

For an understanding of how the controller works, we advise checking out the video above.

Perhaps the most interesting thing about TORC is its simplicity. It has no moving parts, so we guess it would be easy for Microsoft to move from development to product stage. Furthermore, it will work with other devices too, such as game controllers and styluses.

Read more about it at Microsoft Research here.