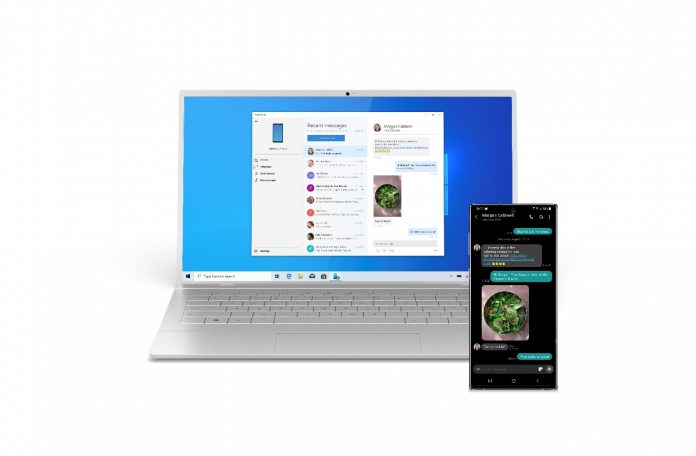 Microsoft and Samsung had a lot to discuss today at the launch of the Galaxy Note 10 and Galaxy Book S. As part of the strengthening partnership, Microsoft apps will now be more deeply integrated into Samsung devices. Also, Samsung is now boosting the abilities of Microsoft’s Your Phone service with its Dex application.

As we already reported today, Microsoft has teased the ability to take calls from an Android smartphone on Windows PC through Your Phone. That functionality will come to all supported Android devices later this year.

However, the extended partnership between Microsoft and Samsung has seen the South Korean company offer more to Your Phone.

At its “Unpacked” event today, Samsung showed an overhauled Dex application that added many features Microsoft has been promising for Your Phone. Samsung Galaxy Note 10 users can now connect to a Windows PC (or indeed a Mac) and access a VM version of their smartphone on the PC.

There are some differences to the Your Phone concept. Firstly, the good news is the Dex app provides the full smartphone experience, including actionable notifications and calls. Not so good is that it only works through a physical USB Type-C tether. Microsoft’s Your Phone works untehthered.

We doubt that will be much of a deal breaker as Samsung pitches Dex as more of a business companion. To highlight that, the app supported drag and drop file interactions.

“And now, with native integration of Link to Windows on Galaxy Note10, it’s never been easier to connect your Samsung phone to your Windows 10 PC. Just connect your Galaxy Note10 with your PC via the Link to Windows setting and get instant access to your Android phone’s content that matters to you. Now there’s no need to dig for your phone to check notifications, schedule a ride to the airport, or even text. And you can finally stop emailing yourself photos as you can drag and drop photos directly into your email or your PowerPoint presentation.”

So, this is another example of Microsoft dragging its feet building Your Phone functionality and Samsung simply creating a tool that does everything from the get go.