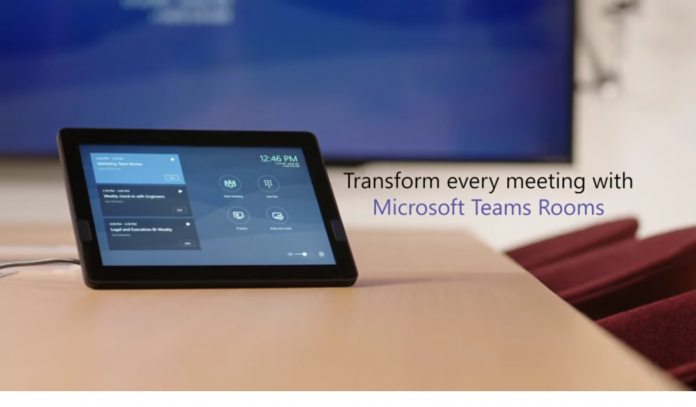 Skype Room Systems is Microsoft’s series of devices built by partner OEMs for meeting rooms and videoconferencing. In a blog post today, the company said it is not just simple changing the name of the range.

Instead, Microsoft Teams Rooms devices come with some new features. For example, devices will now allow meetings to begin with a single touch, a feature Microsoft calls “One Touch Join”. Elsewhere, using Microsoft Teams, hardware will be able to detect open conference spaces.

Another new feature is the Teams Meeting button, which will now have an “Add a Room” which makes it easier to link multiple conference rooms in a single meeting. Microsoft says it will also introduce support for dual screens in an upcoming update.

Partner OEMs adopting Microsoft Teams Rooms include HP, Logitech, Lenovo, and Polycom. Those companies are expected to introduce new devices alongside Microsoft at the Integrated Systems Europe event in February.

Microsoft says 2,435 conference rooms at its Seattle base have already been upgraded to Teams Rooms.

“We started with one hardware partner and now work with six leading device manufacturers, to deliver the best quality experiences for both Skype for Business and Microsoft Teams meetings.

“To date, customers have conducted more than 130 million minutes of meetings through Skype Room Systems. In light of this momentum, and to mark our commitment to making Teams a complete meeting and calling solution, we are rebranding Skype Room Systems as Microsoft Teams Rooms.”