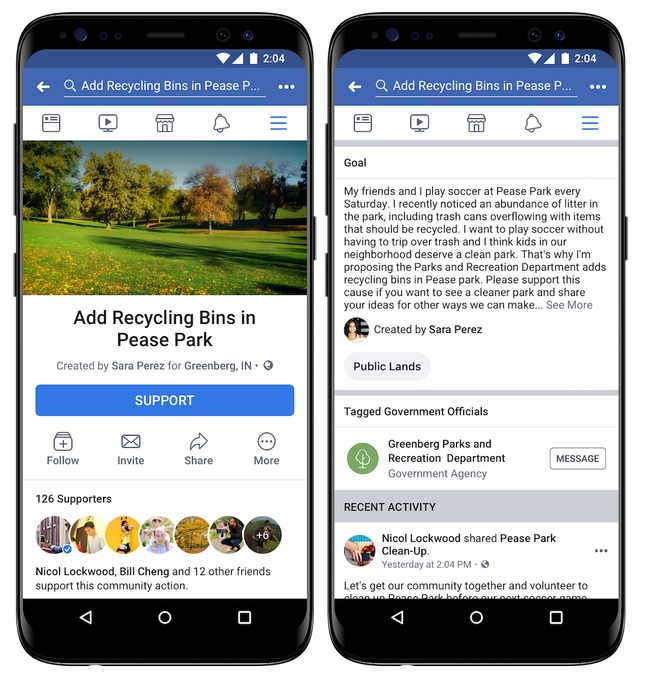 Facebook has often tried to be a one-stop internet shop. This has meant competing with other services across a broad range, from battling LinkedIn in business to competing with YouTube in video streaming. The social network’s latest venture is targeting websites such as Change.org.

A new Facebook feature called Community Actions is currently in testing. It will allow users to voice political causes and demands and have other users support these pages.

While Change.org is purpose built for this, Facebook is repurposing an existing system for Community Actions. Essentially the service is a Facebook Pages profile with a “Support” button instead of “Like”.

In other words, users will be able to support a cause rather than like it. As for users setting up a Community Actions page, they will be able to title the cause or movement, describe it, add images and tag external resources.

In a statement to TechCrunch, a Facebook spokesperson described Community Actions as a way to bring people together on shared causes:

“Building informed and civically engaged communities is at the core of Facebook’s mission. Every day, people come together on Facebook to advocate for causes they care about, including by contacting their elected officials, launching a fundraiser, or starting a group. Through these and other tools, we have seen people marshal support for and get results on issues that matter to them. Community Action is another way for people to advocate for changes in their communities and partner with elected officials and government agencies on solutions.”

The company says Community Actions will start as a platform specifically for political movements. However, it is easy to see how it can quickly expand to encompass any cause someone wants to raise.

There are some concerns about this feature. For example, Facebook is known for playing fast and loose with user data. We know the company monitors and monetizes personal information from its users. Could the data from Community Actions allow the company to engage in more detailed political profiling?