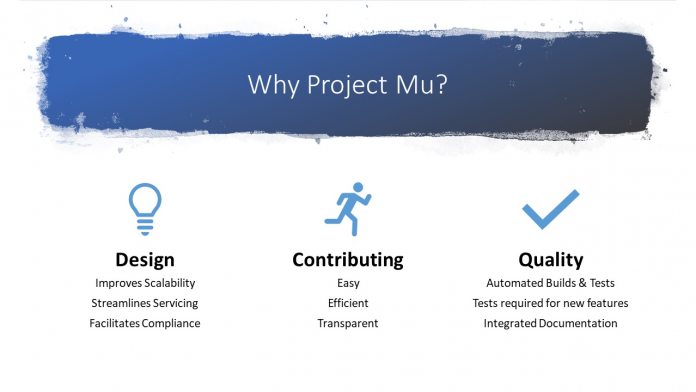 Microsoft has revealed it is open-sourcing Project Mu, allowing the open modular adaptation UEFI-BIOS to become a Firmware as a Service (FaaS). Project Mu was first announced as a GitHub project back in October and is now becoming widely available.

Microsoft says its built Mu around a concept about how UEFI development should be. Specifically, the company understood a UEFI product is part of an evolving collaboration that starts with creation and moved through shipping and maintenance.

“For too long the industry has built products using a “forking” model combined with copy/paste/rename and with each new product the maintenance burden grows to such a level that updates are near impossible due to cost and risk.”

Microsoft says Mu has been created with two specific goals in mind. The first is to promote that this is not a side platform but is a core part of code that Microsoft uses on its own services. With that in mind, the company is calling on partners to help with the continued development.

Secondly, Microsoft says it wants collaboration to be the core of Project Mu, allowing innovative improvements in the service.

With Project Mu, developers can create products through a multi-repository that separates original source and standard code. Mu is a development of Microsoft’s own experience building Windows 10 PCs. It allows developers to scale up or down on IoT, Server, and PC.

If you want to see Project Mu, check out the GitHub page here.