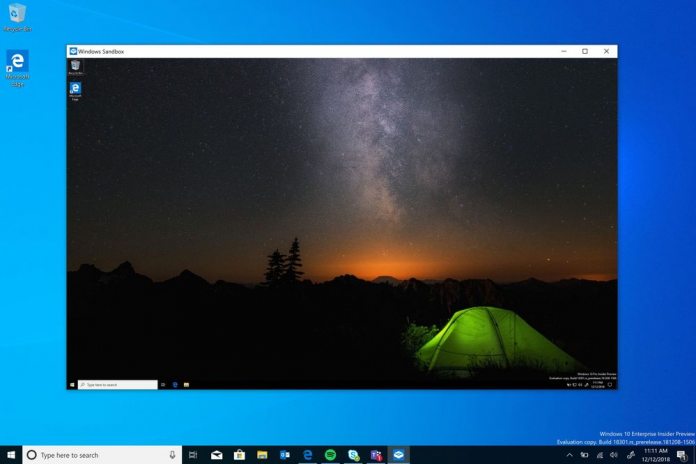 Microsoft is ramping up its Windows 10 19H1 preview branch ahead of its full launch in the first half of 2019. In recent weeks, Insiders have started to receive the new features that will make the next feature update. Perhaps one of the most interesting new additions so far is called Windows Sandbox.

Announced by Microsoft, Windows Sandbox serves as an integrated virtual desktop for Windows 10 Pro and Enterprise users. As the name sandbox suggests, the desktop provides a secure location for users to run a desktop, or as Microsoft says a “lightweight… isolated, temporary, desktop environment“.

Windows Sandbox allows users to run software they may believe to be harmful on their PC. Organizations can run these programs without damaging the PC long term once the software is closed. As the sandbox desktop is temporary, all files associated with malicious software will be permanently deleted.

Of course, running a sandboxed desktop on Windows 10 is not impossible at the moment. However, a Windows 10 Pro or Enterprise user needing such a solution would need to get it from a third party.

Microsoft says one benefit of Windows Sandbox is its integration, meaning no additional software is needed. Interestingly, when Sandbox is run, it functions as a brand-new Windows 10 copy without any trace of a previous session.

At the moment, sandboxes will only run on Windows 10 Pro or Enterprise build 18305. This is a preview build which should come to Insiders soon. Microsoft points to the following system requirements to be able to run Windows Sandbox: