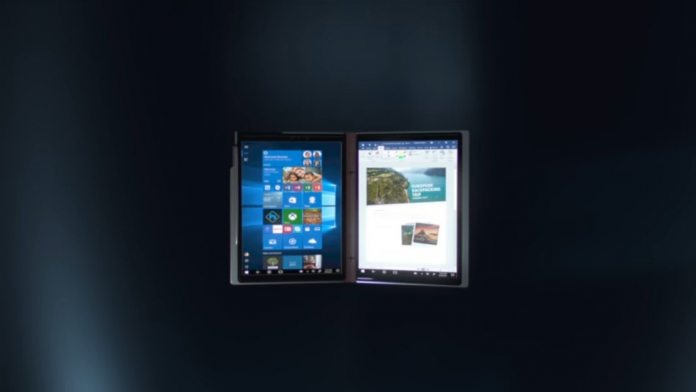 Last week, it was reported Qualcomm’s upcoming Snapdragon 8cx processor can support dual screen Windows 10 devices. In a promo for the chip, the company showed how such a device would look. The implication could mean a dual-display folding device running Windows 10. However, a new rumor suggests the reality may not be as exciting.

According to Twitter user Kevin Cocquyt and furthered by MSPowerUser, the device in the promo looks like two Surface Go devices stuck together.

The report suggests the Qualcomm-powered device will be nothing more than a glued pair of Surface Go’s.

However, it is worth noting that we disagree that this is the Surface Go. Firstly, Qualcomm is not a hardware manufacturer so typically uses other devices in videos. However, those devices are usually renders or mock ups of a simple reference hardware.

That's 2 Go's 'magnetized' together (a screen instead of a detachable keyboard)?

Sure, the company may has created this promo render to be similar to the Surface Go, but we don’t think it is Microsoft’s device. Not least because the bezels on the Surface Go are larger than on this reference device.

Also notable is the fact the Snapdragon 8cx is ARM-based, whereas the Surface Go is Intel-based.

What we do agree on is that the promo hardly shows off an exciting device. It does seem as though two tablets are operating, but not as a single device. In fact, it looks like both are set in some kind of case. We guess they would be connected somehow to create a singular experience, but the promo does not show a folding device.

Again, it is worth remembering Qualcomm is merely highlight the Snapdragon 8cx and offering a reference to a possible hardware configuration. Manufacturers would be free to develop their own hardware designs.