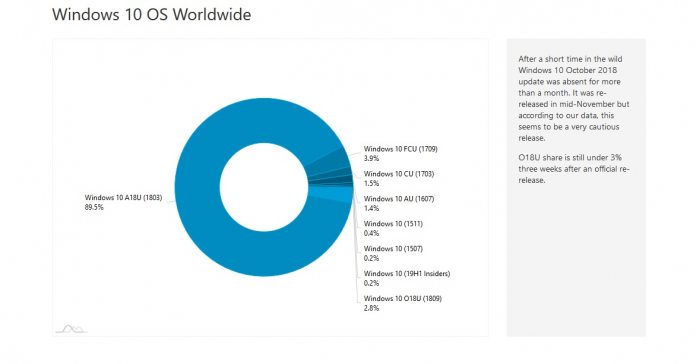 Earlier this month, Microsoft relaunched Windows 10 version 1809 (October 2018 Update) after delaying the update for a month. Considering the disaster version 1809 has been, it is understandable Microsoft is rolling out the update more cautiously. That’s exactly what is happening according to AdDuplex.

According to the industry researcher, the released Windows 10 version 1809 is reaching users more slowly than other feature upgrades. After so many problems through October, it stands to reason that Microsoft is moving more softly as it rolls out the update.

“The Windows 10 October 2018 update re-released in mid-November but according to our data, this seems to be a very cautious release,” AdDuplex notes. “October 2018 Update share is still under 3 percent three weeks after an official re-release.”

AdDuplex has basically confirmed what we already know from people we know. From readers, friends, and most other reports, the consensus is most users have not received the update yet. This is also true of users running Microsoft’s new Surface devices, such as the Surface Pro 6.

Microsoft initially launched the platform on October 2 alongside new Surface devices. However, version 1809 was quickly put on ice as the manual update was deleting personal user files. Pulled yes, but not before reaching millions of users.

Microsoft says the issue is caused by Intel’s new Display Driver. This was released in September but is not compatible with Windows 10 version 1809. Redmond confirms that the problem is due to “OEMs that accidentally turned on unsupported features in Windows.”