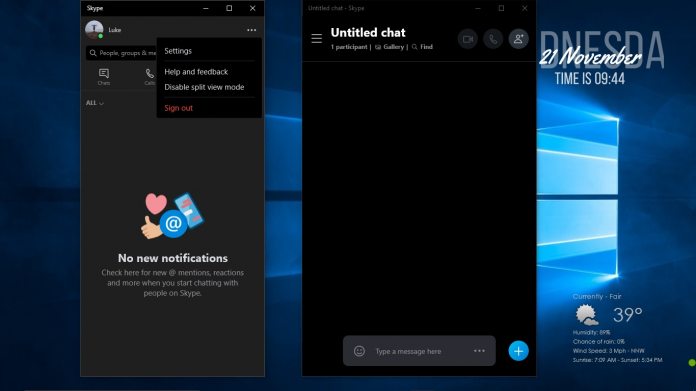 Last month, Skype Insiders received a sizeable update to coincide with the launch of the Windows 10 (version 1809) October 2018 Update. Leading the batch of new features was Split View. As Windows 10 version 1809 was delayed by a month, general Skype users have had to wait to receive Split View.

Well, today the wait is over as Microsoft is now rolling out the Skype update to all Windows 10 users.

Those windows become easily accessible as they are individually placed on the Task Bar.

Another feature added to the app are the anticipated read receipt feature. This feature provides contact heads under a message when it is read by a contact. This is probably a valuable tool for group meetings as it tells you which of the group have seen the message or not.

Microsoft’s goal has been to make Skype a more universal experience across platforms. While the UWP version created a uniformed app on Windows, it differed from the mobile experience. The new Skype for Windows 10 app is much more similar to the cross-platform Skypev8 client.