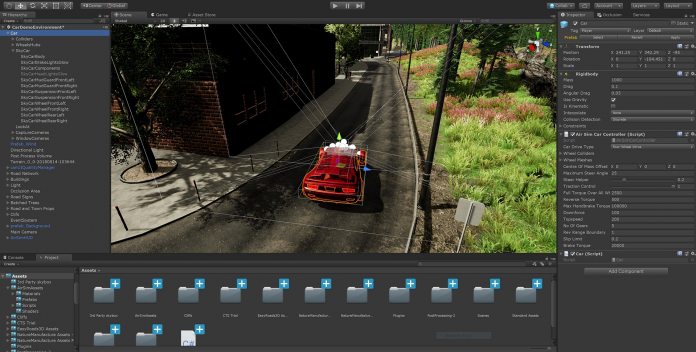 Microsoft and Unity have announced a new collaboration that brings Redmond’s AirSim project to the cross-platform game engine. With the launch, the AirSim Aerial Informatics and Robotics platform on Unity, Microsoft says manufacturers and developers will be able to enhance their autonomous vehicle technology.

AirSim is a Microsoft Research project that allows drone manufacturers and software developers to create robotic autonomous systems. As the name suggests, the platform provides a realistic simulation environment. Designers can use the sim to train their machine learning technology and generate data for analysis.

Notably, the platform has since been expanded to autonomous cars. On Unity, Microsoft wants AirSim to further development of autonomous vehicles:

“Our goal with AirSim on Unity is to help manufacturers and researchers advance autonomous vehicle AI and deep learning. Unity gives its OEM clients the ability to develop realistic virtual environments in a cost-efficient manner and new ways to experiment in the world of autonomous and deep learning,” said Ashish Kapoor, Principal Researcher at Microsoft Research & AI.

In the development of the platform, Microsoft leveraged the latest graphical capabilities to create a realistic looking world. To ensure the simulated environment matched real-world dynamics, the research team developed physics and perception AI.

On Unity, AirSim will use the engine’s C# development environment and integrate with solutions from the Unity Asset Store. Unity says the benefits of its cross-platform availability will be realized shortly:

“We embrace seamless cross-platform support as a core principle, which is why Linux support will soon follow today’s release of AirSim for Windows. With the upcoming Linux release, you will be able to run highly performant simulations no matter which platform you choose.”

AirSim on Unity is available now on GitHub.