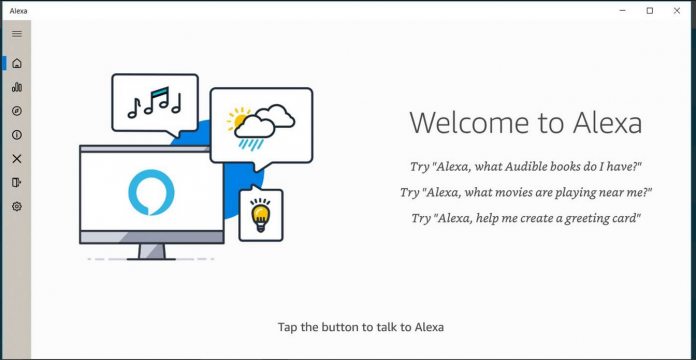 Microsoft’s collaboration with Amazon to integrate Cortana and Alexa together is moving to the next stage. Amazon’s Alexa application for Windows 10 is launching today.

Of course, some laptops have been shipping with Alexa already installed. However, this is the first time Amazon’s voice assistant and once Cortana rival has been available from the Microsoft Store. All Windows 10 PC owners can download the app, but some functionality is dependent on compatibility.

Only compatible devices will support the Alexa wake word feature. This is an ability that allows users to wake Alexa by voice command. However, for non-compatible devices, users can hit the button on the app to start talking (a keyboard shortcut also works).

We have written before about Microsoft’s deal with Amazon opening the door for further Alexa dominance. Amazon’s assistant is the market leader and now has a direct line to Windows users. The partnership allows Cortana to be evoked on Alexa, and vice versa.

However, Microsoft is reportedly increasing its push towards Cortana being an enterprise-focused product. That may lead to Alexa largely becoming the go-to assistant on Windows 10. With that in mind, the new app will take care of plenty of your everyday tasks.

For example, users can access Alexa to control music and control smart home devices. Other features usually available with the assistant are not included, such as Spotify integration, video playback, calls, and more.

Amazon is likely to add these, while the company says Windows 10 access to “PC-specific capabilities will be added in early 2019 in addition to ongoing feature updates.”

Earlier today, we reported on Microsoft’s introduction of Windows 10 Preview Build 18277, a 19H1 release. In its changelog for that build, the company urged users to start using the Cortana/Alexa integration:

“If you haven’t already tried it out, simply click the microphone icon in Windows Search on your Windows 10 PC and say ‘’Hey Cortana, open Alexa’. Or, on your Amazon Echo device, say “Alexa, open Cortana” on Echo devices.”