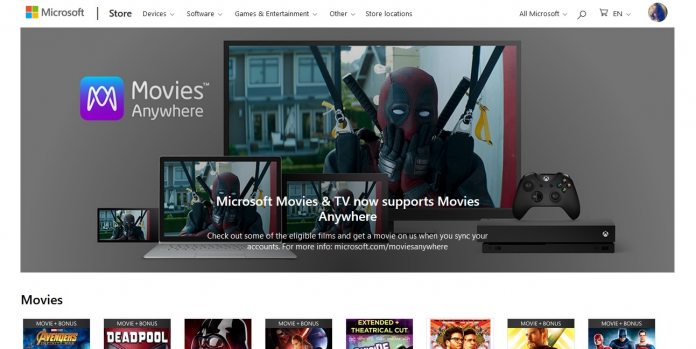 Yesterday, Microsoft announced Movies Anywhere is available for its Movies and TV customers. The service makes its return to Windows and changes in the Microsoft Store are already underway. Microsoft is now highlighting movies that work with Movies Anywhere.

If you are unfamiliar with Movies Anywhere, it is a Disney owned streaming service. With that in mind, it is obvious the Microsoft Store would highlight Disney movies compatible with the platform.

However, Disney changed the service two years ago to allow streaming of content from other studios. That means the Microsoft Store is also highlighting content from Twentieth Century Fox, Universal, Sony, and Warner Bros.

Finding if a movie is eligible is as easy as looking for the Movies Anywhere logo on a Microsoft Store listing. It is worth remembering that the platform is a US-only service, so only the US version of the Microsoft Store will show compatibility.

This seems to be an ongoing process. On the web and Windows 10 store, Microsoft has so far changed over 70 movies to be eligible for MA. Among them are leading recent titles, such as the latest Star Wars movies (as well as the whole saga) and Avengers: Infinity War.

Microsoft points out users should regularly check the listings as “our movie catalog and list of Participating Studios changes.”

As we mentioned yesterday, Movies Anywhere is rolling out a red carpet for Microsoft account holders by giving them X-Men: Days of Future Past for free.

Movies Anywhere is a cloud-based streaming platform which used to show exclusive content from Disney. Last year, the service switched to accept content from other studios but is still owned by Disney.

Movies Anywhere does not function as a streaming service like Netflix. Instead it acts as an online curator of sorts, connecting to digital stores like iTunes, Amazon, and Google Play. This is important because it allows users to connect their media content across ecosystems, platforms, and devices.