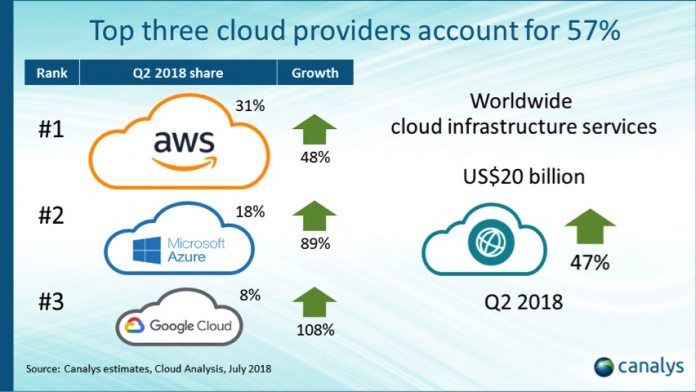 Microsoft’s Azure and general cloud performance is helping the company to new heights. We already know it spurred the company beyond the $100bn revenue mark for the first time last year. However, how does the success of Azure shape up in the general market?

Well, analyst firm Canalys has published a report detailing how much organizations spent on cloud infrastructure during the second quarter of 2018.

Interestingly, it makes good reading for all the leading cloud providers. A total of $20bn was spend in the last frame. The situation is something I have discussed before… this is a good time to be a cloud provider. All major players in the market are growing, but each is fairly secure in their current market position.

This is best emphasized by the fact Google Cloud (third-placed market position) is growing, but not catching Microsoft Azure (second-place), which is also growing but now catching Amazon (first-place).

Showing the overall health of the cloud market, the top three providers accounted for 57 percent of the $20bn spent last frame.