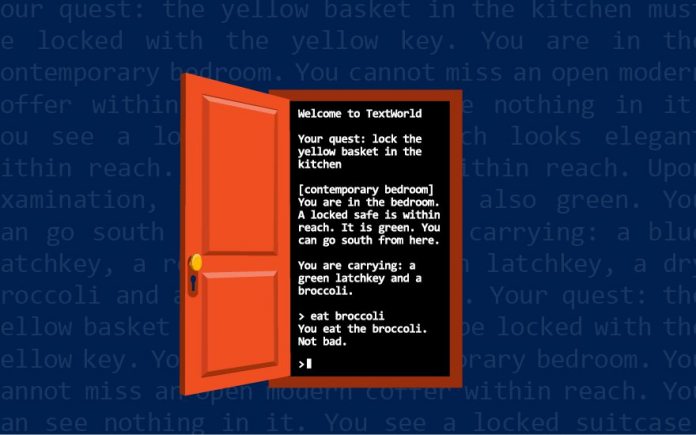 Text-based games are good learning tools for AI and researchers can leverage TextWorld to train and test AI. Among the learning abilities available through the project are the improvement of memory, language understandings, exploration, planning, and more.

“These two technologies are both really important, but they don’t fit together that well yet. TextWorld will push researchers to make them work in combination.” Gordon pointed out that reinforcement learning has had a number of high-profile successes recently (like Go or Ms. Pac-Man), but in all of these cases the agent has fairly simple observations and actions (for example, screen images and joystick positions in Ms. Pac-Man). In TextWorld, the agent has to both read and produce natural language, which has an entirely different and, in many cases, more complicated structure.”

If you are unfamiliar with text-based games, they are adventure games where players interact solely with text. Through decision-based gameplay, users move through the game world. These games are also known as interactive fiction and often have multiple outcomes and avenues to explore.

“As players moves through the game world, they observe textual descriptions of their surroundings (typically divided into discrete ‘rooms’), what objects are nearby, and any other pertinent information. Players issue text commands to an interpreter to manipulate objects, other characters in the game, or themselves. After each command, the game usually provides some feedback to inform players how that command altered the game environment, if at all. A typical text-based game poses a series of puzzles to solve, treasures to collect, and locations to reach. Goals and waypoints may be specified explicitly or may have to be inferred from cues.”

These games present numerous challenges, from problem solving and decision making to command understandings and willingness to experiment. Additionally, and arguably the biggest hurdle to AI is the fact text games require common sense. Analytical thinking is not always necessary, but the willingness to lose (effectively die) is.

TextWorld employs these gameplay traits to test AI. In the game, artificial intelligence needs to be able to understand, observe, fail, experiment, and make decisions.

The project comprises a game engine and game generator. Microsoft Research explains the latter creates game parameter such as in-game objects, the number of rooms, game length, and how the game can be defeated. Once generated, the game is executed in source code written in the Inform 7 language.