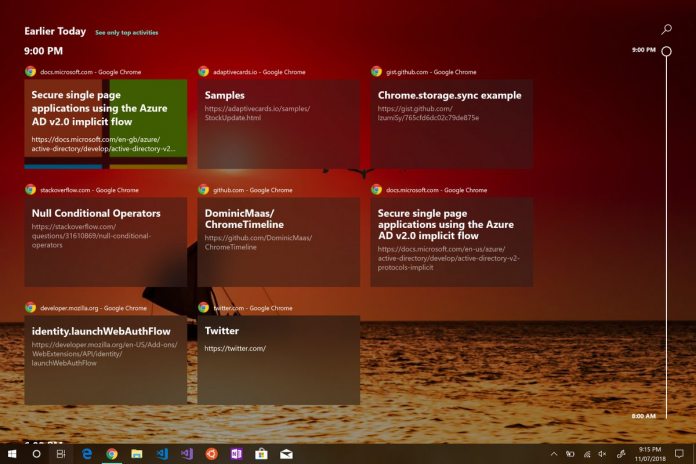 After much delay, Microsoft launched its Windows Timeline feature with the April 2018 Update. The tool lets users sync activity across devices and find previous situations in Windows. Microsoft has said the feature will eventually work on other platforms, but it seems a third-party has already implemented Timeline on Google Chrome.

Windows Developer Dominic Maas says he managed to integrate the feature into the Chrome browser. This was possible because Microsoft left Timeline open for developers to use.

Maas created an extension for the browser that works similarly to how Microsoft integrates the feature into Edge. The extension is not available yet, but Maas says he will release it soon. He currently has a project open on GitHub for users to follow the progress.

On Windows 10, Timeline is a useful feature. It allows users to see what they were doing at certain points in time. The tool presents a map of activity through past Windows 10 use and sets out app movements in easy to use cards.

I found an extension for Chrome that enables Windows Timeline support, but it was a weird hybrid paid store app + free chrome extension. Decided to create my own, acts like Microsoft Edge currently. pic.twitter.com/h86amjLm0t

Microsoft delayed Timeline several times before it finally shipped with Redstone 4 (April 2018 Update). Microsoft previously said it would make activities dynamic across devices, allowing users to pick up any Windows 10 device and have a connected experience. That cross-device expansion also included other platforms.

Earlier this week, Microsoft confirmed it is working on bringing Timeline to Android. Unlike the browser extension from Haas, Microsoft’s development will likely integrate directly into Android, possibly through the Microsoft Launcher.

Vishnu Nath, head of program management, Microsoft Mobility Experiences, confirmed development of an Android implementation is ongoing. As that vague statement (see below) suggests, no ETA on its availability was given.