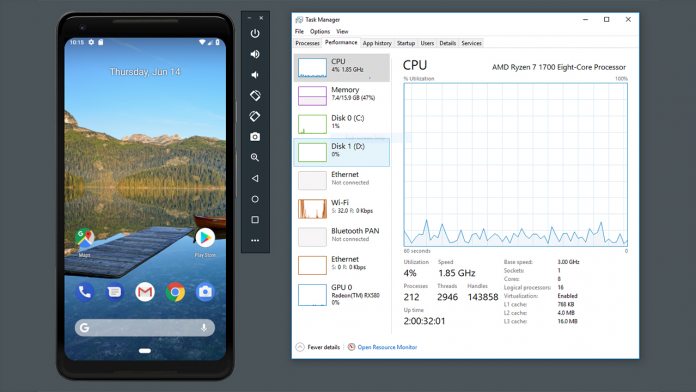 Google’s Android Emulator has received a significant upgrade with support for Microsoft’s Hyper-V and AMD processors. Developers have been requesting the features for some time and Google has finally caved to their wishes.

“Over the last few releases, we have launched quick boot & emulator snapshots for quickly starting and resuming emulator sessions in under 2 seconds. Up until now, our emulator experience has almost universally worked on macOS® and Linux computers. But for users of Microsoft® Windows® or the Microsoft® Hyper-V™ platform, our hardware accelerated speed enhancements for the Android Emulator only worked with computers with Intel® processors,” said Android product manager Jamal Eason in a blog post. “Support for AMD® processors and Microsoft Hyper-V hypervisor are two long-standing user requests from the Android developer community that we are happy to address with this Android Emulator update.”

Crucially, the update will let developers on AMD processors make use of hardware accelerated performance, rather than the previous software emulation. The move should make Android Emulator accessible to a wider range of users.

Adding to that is the connection to the Hyper-V API, made possible by improvements in the Windows 10 April update.

“For those of you who use Hyper-V to run your local app backend, the Android Emulator can now also coexist with other Hyper-V-backed applications on Windows 10,” explains Eason.

However, Google is making its preferences clear, despite the AMD support. The update also enables additional speed improvements for those using the Intel Hardware Accelerated Execution Manager.

You can follow the instruction on the official blog to get the latest version of Android Emulator and enable Hyper-V in Windows 10. Google is also looking for bug reports via its Issue tracker.