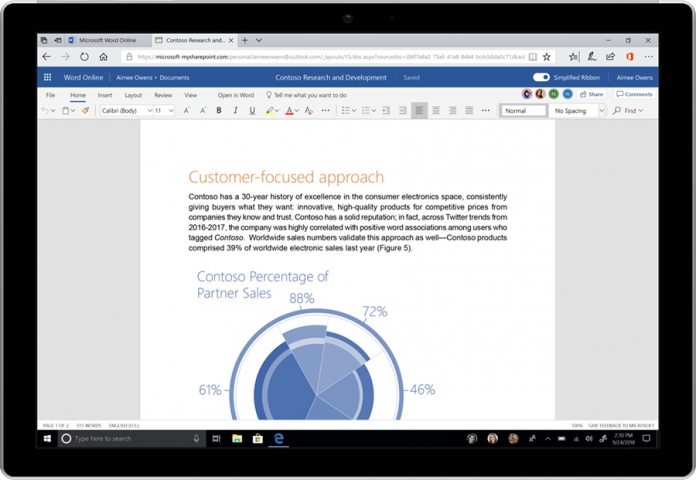 Microsoft has announced an overhaul of the UX for Office 365 applications Word, Excel, PowerPoint, and Outlook. The redesign of the apps will arrive over the coming months for Office 365 and Office.com. Microsoft says the changes will be made in stages.

In its announcement, the company points to changing work environments as the inspiration behind the changes. Specifically, the focus is on “power and simplicity”.

Office is now used by more than one billion people each month. With that in mind, Microsoft stresses the importance of making sure all users get the best experience. To help ensure this, Microsoft worked to a guideline it calls “The Three Cs”. These principles are detailed in the announcement as such:

“Customers—We’re using a customer-driven innovation process to co-create the design of the Office apps. That process consists of three phases: initial customer research and analysis; concepting and co-creation; and validation and refinement.

Context—Customers love the power of Office, but they don’t need every feature at the same time. We want our new designs to understand the context that you’re working in, so you can focus on the job at hand. That means surfacing the most relevant commands based on the work you’re doing and making it easy to connect and collaborate with others.

Control—We recognize that established skills and routines are powerful—and that the way someone uses the apps often depends on specific parts of the user interface. So we want to give users control, allowing them to toggle significant changes on and off.”

New colors and icons—App icons and colors will be changed with support for scalable graphics. Microsoft says the icons will “render with crisp, clean lines on screens of any size. These changes are designed to both modernize the user experience and make it more inclusive and accessible.” The new colors and icons will comes to Office Insiders later this month.