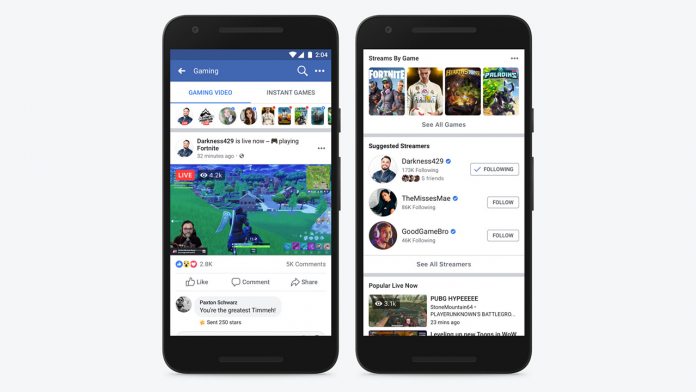 Facebook’s live streaming platform just got a major upgrade in the form of a dedicated discovery page. Available at fb.gg, it aggregates content from a number of creators, prioritizing those users follow, as well as links to pages and groups they’re a part of.

It displays past content as well as live, letting users drill down into specific games. It also features creators, esports competition and industry events Facebook deems interesting, such as the upcoming E3 conference.

It’s a mixture of Twitch’s homepage and Pulse, which offers a Twitter-like news feed where creators can post text, video, and image updates to their followers. The idea is to cut out third-party social media entirely, and Facebook is fighting back.

“We’re in an experimental phase and will continue to test new experiences, including a feed where fans can explore relevant gaming content, improvements to recommendations, expanded gaming video inventory in more languages and integration of an Instant Games tab on the mobile version of our gaming destination so people can toggle between watching and playing games,” notes Facebook.

However, it seems unlikely that Facebook gaming will take off anytime soon. As well as the negative press from its recent scandals, the platform has poor quality video and an outdated player. Until it fixes those issues, users will prefer Twitch and Mixer, though the company is adding more ways to fund creators.

As well as paying creators and esports to feature on fb.gg, Facebook will launch a new ‘Level Up’ program. The service will allow members to earn through ‘Facebook Stars’. When fans purchase and send virtual goods during a stream, the creator gets a cut, much like on Twitch and Mixer.

Level Up members also get early access to new features, tips, best practices, and access to Facebook support. The idea is to support those who may be new the streaming world but are familiar with social media.

Finally, Facebook is expanding its gaming creator program, which lets streamers test monthly, Patreon like support from fans. The social media giant will showcase all of this at it’s booth at E3 in South Hall, where it will also feature popular streamers.