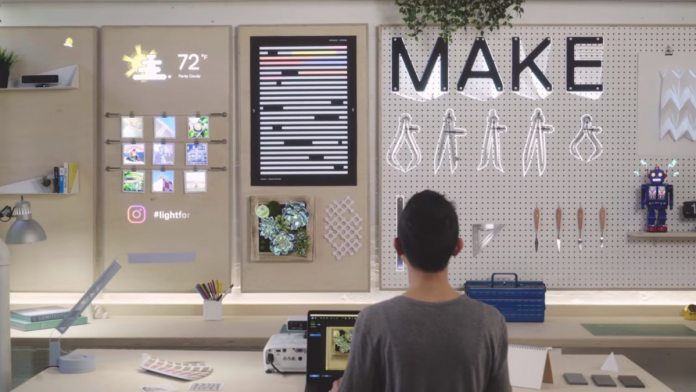 Back in April, we wrote about Lightform, a new Microsoft co-researched project that would build on the company’s Illumiroom augmented reality. While that was a proof-of-concept project using Kinect, Lightform is a fully-fledged system that is now available for purchase.

Lightform is largely a derivative of Illumiroom, however, it is not wholly developed by Microsoft. Illumiroom was announced at CES 2013, leveraging Kinect as a camera and projector system to blur virtual content with the real-world environment. It was an early pointer towards Microsoft’s augmented reality efforts.

Among the abilities of Illumiroom were the ability to extend field of view, introduce new content interactions, and change how the real-world environment looked. The project never reached beyond being a proof-of-concept, but the team working on Illumiroom stayed with the idea.

And that’s where Lightroom comes into the equation. The company’s co-founders, Brett Jones and Raj Sodhi used to work for Microsoft on the Illumiroom project. With their new company, they partnered with Microsoft and other industry collaborators to create Lightform.

“Fundamentally it’s an experience where you have to deal with a headset and you have to put on the strap and learn how to clip it,” Jones said. “And then you see the magic. And what we like about projected AR is first you see the magic and then eventually you figure it out that there’s a projector.”

The device connects directly to an existing projector and shapes outputted light to mimic objects and the real-world room. Featuring a processor and high-resolution camera, the hardware is powerful enough to map different surfaces and understand what individual objects are.

Lightform is now available under the model number LMF-1. It costs $699, which is around par for the course in terms of augmented/virtual reality devices.

As well as the first device, Lightform will also be available in a starter kit from this summer. In the kit is a 1080p projector, a tripod, and other items. This will be available for $1,499.