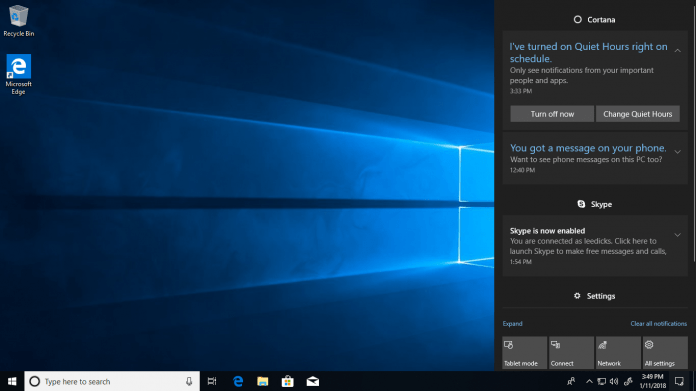 Microsoft has released one of the biggest Redstone 4 updates yet, giving Insiders a solid glimpse at what’s to come. Windows 10 build 17074 makes changes to the Windows Shell, allowing for the introduction of Quiet Hours.

It’s a feature some will be familiar with from Android and iOS, but it’s only become necessary on Windows since the release of 10. Essentially, it lets users set a period where they won’t be bothered by Action Center notifications. Instead, you’ll only see messages from people flagged as important.

Importantly, there are also automatic rules for this. You finally won’t be bothered while in a fullscreen, DirectX game. This also applies when duplicating your display, and by making use of Cortana, you can have Quiet Hours on at work, but off while you’re home.

Also enabled by Shell tweaks is a modified Start Menu. In response to feedback, Microsoft will now display some directories on the menu by default. By placing the Documents and Pictures folders by default, the company hopes to make things smoother for new users.

Talking of ease of use, Near Share has also received an upgrade. The feature lets two nearby PCs share files or links easily via Bluetooth. Build 17074 introduces some much-needed reliability improvements and bug fixes.

Of course, every major Windows update comes with tweaks to Microsoft’s browser. This build focuses on the Hub and Reading views.

The hub has a revamped interface, showing more content, yet being more intuitive to use. Different hub sections, such as favorites, reading list, books, and history all display on the left-hand side for easy switching.

Meanwhile, the reading experience has a different look and feel, as well as new features. It integrates the new Fluent Design System, while also adding a new pop-up menu for Notes that lets you jump between annotations. The scrub bar has also been improved, with the ability to go to specific pages using Ctrl+G.

You can take now this experience fullscreen and make use of ‘Grammar Tools’. The addition will enable comprehension aids, splitting words intro syllables and highlight verbs, nouns, or adjectives.

In short, Edge is getting closer and closer to a fully-fledged e-book reader, and that’s enhanced by the ability to listen to Audio Narrated books.

Last but not least, Edge supports the new variable fonts standard by OpenType. It lets designers adjust the weight, slant, and width of a single font to better match the content they’re displaying.

Naturally, there are hundreds of other tweaks we haven’t mentioned here, including Settings improvements, handwriting tweaks, and bug fixes. You can find the full list of changes on the Microsoft blog.