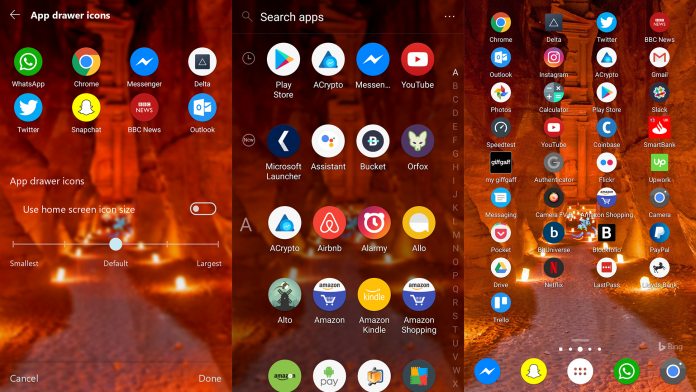 The Microsoft Launcher has experienced a steady evolution, slowly integrating more features as Arrow Launcher before taking a few steps backward for its rebrand. Now it’s fair to say that its a true successor to the former Microsoft Garage project, helped by its most recent update.

Version 4.5 introduces some good productivity features, but also some visual ones. Users can now change the size of their dock, home screen, and drawer icons independently to suit their preference. This means you can have more prominent icons on the dock, and smaller ones on your app screen.

On Android Nougat and above, you’ll also be able to set wallpapers for your home and lock screen, as well as blank pages in vertical mode. The result should be a more tweakable experience, with plenty of space where you need it.

However, Microsoft has always had a big focus on productivity, and it appears to be targetting that specifically with this release. You can now let meeting attendees know you’ll be running late directly from the calendar card, saving taps.

Thankfully, that shouldn’t happen as often with support for recurring reminders. You no longer have to worry about swiping away a notification and forgetting about it.

Still, the most telling business feature is support for Microsoft InTune. This update will let enterprises use InTune’s data protection policies with the launcher when viewing corporate data.

Finally, the Launcher lets you create Android Oreo shortcuts. I assume this means support for dot alerts, which let you see and act on notification content when you tap and hold.