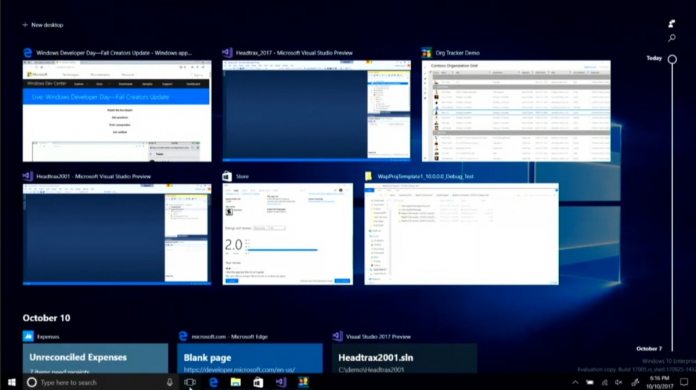 This time next week, we will be discussing the full release of the Windows 10 Fall Creators Update (FCU). Microsoft is finalizing the platform now ahead of its Oct. 17 roll out. One of the key features promised for the FCU was Timeline. Unfortunately, Microsoft delayed the tool, but is now showing us how it will work.

To be clear, Timeline will not be debuting with the Fall Creators Update. Instead, the company will likely roll it out with Redstone 4 early in 2018. That is the next build of Windows 10 to launch after the FCU. Some Windows Insiders are already testing the Redstone 4 branch with the Skip Ahead tool.

Kevin Gallo, head of the Windows Developer Platform, showed the feature at Microsoft’s Developer Day. As we know, Timeline is already available on internal builds and should be coming to the Windows Insider Program soon.

Timeline lets Windows 10 users see what they are doing at a particular time. It is a PC version of Microsoft’s “Pick Up Where You Left Off” feature.

It shows users their activity through their past and give them cards to move quickly between applications. Microsoft plans to make activities dynamic across devices, allowing users to pick up any Windows 10 device and have a connected experience.

As Gallo shows, Timeline is accessed through the Task View button, while a search usage history is also available for individual applications. Microsoft has still not said how long the feature’s memory will be, although we guess it is still in development.

The question remaining is when Timeline will be available for preview. Gallo only said it will come to Insiders very soon. However, during his demo, Timeline was running on Build 17005.

The FCU is currently at 16299.15 ahead of its launch next week. Skip Ahead users running Redstone 4 are currently on Build 17004. That means the next Redstone 4 preview will likely bring with it the Timeline feature. We think that will happen before the end of the month.