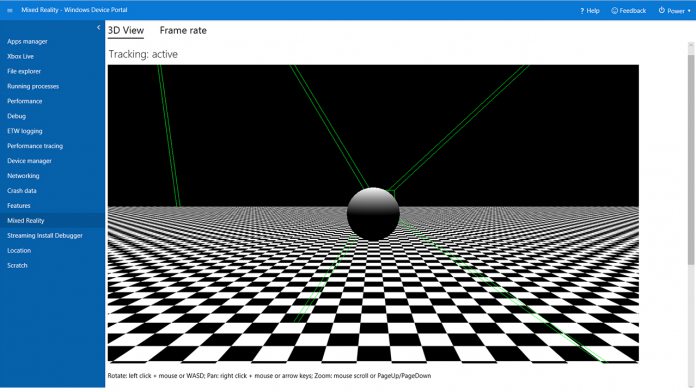 The Windows 10 Device Portal will be getting several improvements thanks to the Fall Creators Update and tools for Mixed Reality headsets are among them. In a blog post, program manager Hirsch Singhal highlighted some of the major changes.

“In the Windows 10 Fall Creators Update, Device Portal now offers several new tools from across Windows to help you location test your UWP, explore Mixed Reality, build new hardware peripherals and test your apps new installation pipeline,” he said. “It’s a little bit of goodness for everyone, and we’re excited to share these with you.”

A major upgrade for users is the ability to test apps from all over the world without leaving the house. A new location tool means you can quickly change the region Windows reports to apps. You simply specify a place on the map and it will display the data relevant to that location.

Interestingly, this also works with Edge, so you can see how web pages would look without the need for a VPN or proxy. However, Microsoft notes that this does not change the locale of your PC. Some apps also don’t work with this feature, as they use IP addresses rather than the Windows API.

The other big addition is tools to make Mixed Reality apps easier to develop. A 3D view and frame create counter will let them see how apps interact in the real world and then assess performance.

Additionally, you’ll be able to run your app on a headset via an ‘Installed Apps’ tab. “While fully immersive apps will always run in Mixed Reality, this new button is particularly useful for 2D UWP apps (or apps that switch between 2D and immersive) when you want to test them in Mixed Reality,” explained Singhal.

The latest functionality will make it far easier to test this, hopefully reducing errors. You’ll be able to edit the status of content groups to test behavior, and much more. USB diagnostics, on the other hand, presents a simple interface with all of your devices, complete with drill downs into detailed properties.

In all, it’s a significant upgrade, and will be available to everyone with the Windows 10 Fall Creators Update in November. Until then, you can access the functionality via Insider builds, where you can also give feedback.