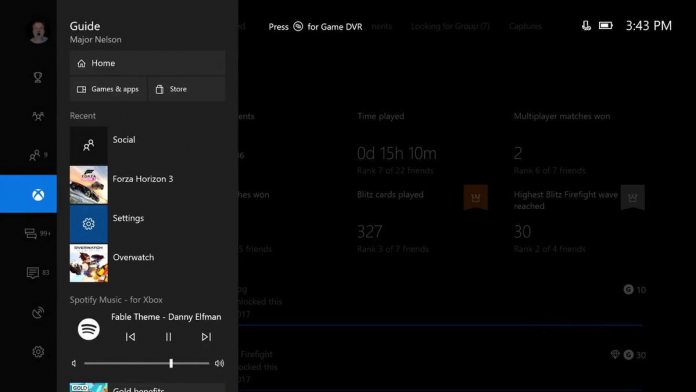 At the tail end of last week, we reported on a leak of Spotify for the Xbox One. Fast forward a few days and Microsoft has officially announced the music streaming service for the console. Microsoft’s Larry Hyrb (Major Nelson) showed the Spotify app icon in his “this week on Xbox” video.

Last week, it was Hyrb who leaked the streaming service. Xbox Live users claimed to have seen the executive using the app on the online gaming platform.

With the proverbial cat out of the bag, Xbox Live Director of Programming, Hyrb, showed the app without officially announcing it. Each week, Major Nelson hosts this week on Xbox series. The video shows the latest news from Xbox One, including new games and trailers.

While discussing the console’s wallpaper at the 9-minute mark the Spotify application can be seen running. If Hyrb is running the app, it means it is already on Xbox One. While this is not an official confirmation, we expect Microsoft will announce the availability during this month.

You may remember Sony has had exclusive rights for Spotify on PlayStation 4. This exclusivity has stopped Microsoft integrating the app on Xbox. It appears Sony’s two-year deal is now coming to an end.

That is certainly beneficial for Microsoft. Not having the most popular music streaming service on Xbox One has been a problem. Sure, users have the company’s own Groove Music service, but having another option is certainly welcome.

Spotify and Microsoft have been getting closer in recent months. Back in May, the company introduced the music app to the Windows Store. However, it was not a Universal Windows app, so is not compatible with Xbox One.

The Spotify app is a Win32 application that has been ported through Project Centennial to the Windows Store.