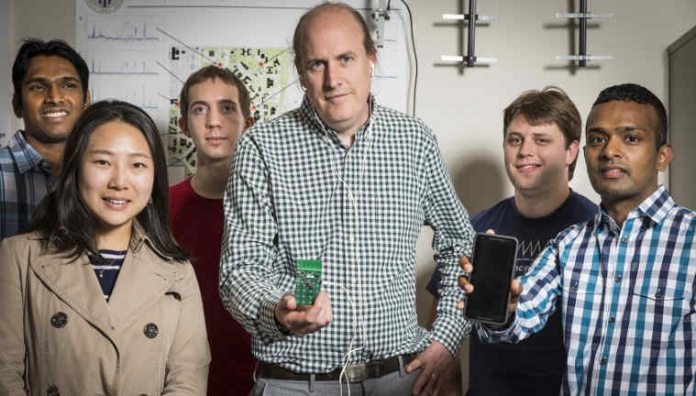 While smartphone technology has improved massively over the last five years, some areas are badly lacking. Battery is the main issue, with manufacturers unable to significantly improve battery life. With customers using devices more regularly and in an always connected world, this is a problem.

A team working out of the University of Washington may has made an important breakthrough. The researchers, based at the Department of Electrical Engineering and the Allen School of Computer Science & Engineering has built a device that works without a battery.

What kind of black magic is this? You would be right in asking. However, its achieved with good old technology. This is a working device that make and receive calls, and put someone on hold. So, at the moment, it is just a phone… how novel.

At the moment, the device is rudimentary and looks like a small computing device as opposed to a handset. For example, there is no body casing, no display, and no battery. However, it works despite these limitations.

“We’ve built what we believe is the first functioning cellphone that consumes almost zero power,” said co-author Shyam Gollakota, an associate professor in the Paul G. Allen School of Computer Science & Engineering at the UW. “To achieve the really, really low power consumption that you need to run a phone by harvesting energy from the environment, we had to fundamentally rethink how these devices are designed.”

It has been tested using Microsoft’s Skype service to make calls while connected to a custom base station. Among the tested and working features include making calls, receiving calls, and putting calls on hold.

The device eats just 3.5 microwatts of power, so it can generate power from tiny vibrations made by the user through the speaker and microphone. Interestingly, while this is really just the first step, it is intriguing that the research team built this ‘handset’ from regular off the shelf components.

As well as powering from user-generated energy, the device can also gather power from ambient analog RF transmissions. These are taken from the base station, which woks up to 31 feet away. Solar technology can also be used as an additional form of powering the unit.

The team says the solar cell would need to be the size of a grain of rice to extend the base station range to 50 feet.