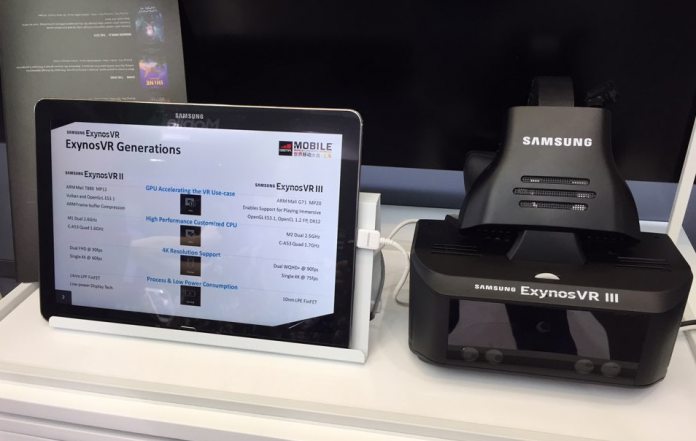 A prototype Samsung VR headset has been augmented with Visual Camp’s eye-tracking technology. Known as Exynos VR III, it requires no external smartphone or computer to run, instead relying on its alleged 10nm hexacore processor and ARM Mali G71MP20 graphics.

It will be joined by hand-tracking features, as well as voice and facial recognition. The technology should allow for foveated rendering, a technique that increases the fidelity of graphics where the user is looking. In turn, this should allow for performance increases without a degraded user experience.

“By collaborating with Samsung Electronics, our technology was internationally recognized at MWCS 2017, enabling us to secure a bridgehead for future global marketing efforts,” said Visual Camp CEO Suk Yunchan in a press release. “Now, we will continue promoting the high quality of Korean startup technologies and products overseas.”

Samsung has been naturally secretive about its latest prototypes. Rumors so far sound very promising, with the Exynos VR III able to run two 2560×1440 at 90Hz or one 4K display at 75Hz.

For now, it’s a bulky device, but that’s expected with such an early model. There’s no official word from Samsung on when it will release, but rumors suggest it will be shown off next to the Galaxy Note 8, or during IFA 2017 in Berlin.

Ultimately, however, it relies on a number of emerging technologies. It will likely be a while until we see a consumer release, possibly next year or even in 2019.