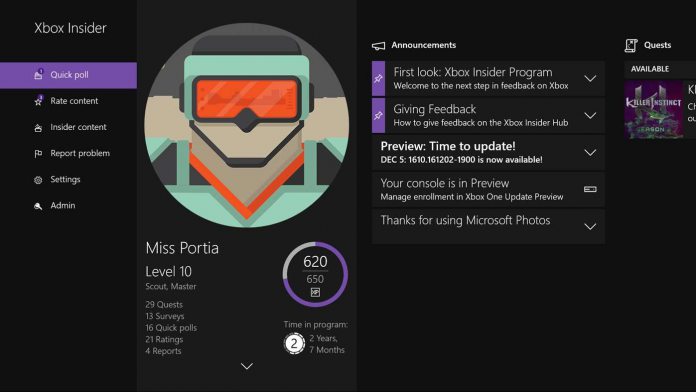 Microsoft’s Xbox Insider Hub app has been in the Windows Store on PCs since April. However, since its debut it has been a useless app. Sure, you could download it, but opening the app would result in a “coming soon” message. Well the hub is longer coming soon and has today been fully launched.

The Xbox Insider Hub is now available to all users running Windows 10 build 14393 and higher. If you are iffy on your build numbers, that’s an Anniversary Update release.

Most Xbox Insiders will already be familiar with the concept of the hub. It is already used (like the Windows Feedback Hub) for users to provide Microsoft with feedback on preview builds. The company uses this information to fix, change, and build features for the Xbox platform.

Until now, gamers have been limited to leaving feedback on their Xbox One. Now they will be able to do so on their PC. It is a minor ability for sure, but probably a welcome one for users who may find a PC experience more intuitive for such things.

As mentioned, this is specifically for Windows 10 PC, there is no Windows 10 Mobile support yet. Indeed, it is likely that Microsoft may never bring the hub to its mobile platform.

As this is a post Anniversary Update exclusive, users running older versions of Windows 10 will be left out. Also, those running 32-bit PCs will also not be able to run the hub app. I guess there are many Xbox One users still running older machines, so probably there are many Insiders who won’t ultimately use this app.

Microsoft has built the Xbox One Hub as a Universal Windows Platform (UWP) application. That means users will get the exact same experience and UI as they would on their console. Admittedly, it is not much of an app, a little sparse even.

However, it is designed to fulfil a specific function and nothing more. There is a Survey that asks users for specific feedback pertaining to the app itself.