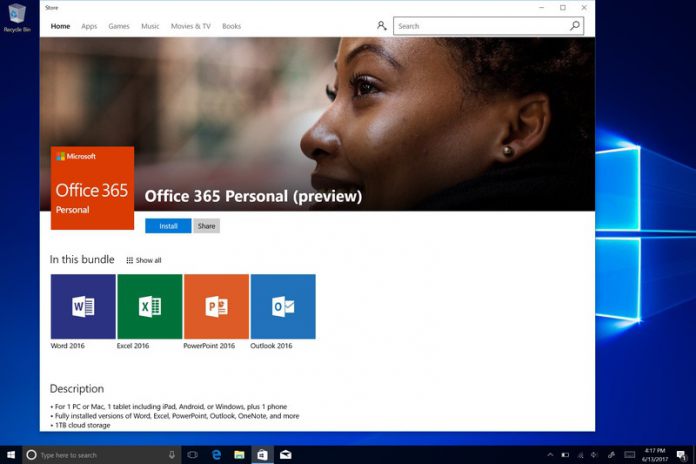 As promised, Microsoft has released the full version of Office to the Windows Store. Today’s release coincides with the company’s roll out of the Surface Laptop to over a dozen global markets. The new device runs Windows 10 S, Microsoft’s education-focused platform that relies on the Windows Store for apps.

The introduction of the Office brings the full productivity suite to the Windows Store. This means users can download apps like Word, Excel, PowerPoint, Publisher, Outlook, and Access to their device.

It is worth mentioning that the apps have been listed in the Store for some time. However, this is the first time they will be made available for download and updates.

As these are Windows Store apps, they are 32-bit versions of Office services ported with Microsoft’s Desktop App Convertor. Because of this, there are a few limitations compared to the full 64-bit Office desktop suite. Twitter user WalkingCat found a support article that discusses these limitations.

Firstly, COM add-ins will not be supported in these apps, while the OneNote app is not getting migrated. Instead, Microsoft will continue to offer the Universal Windows Platform (UWP) version of its note taking app.

Brining Office to the Windows Store

We first heard of Microsoft’s intentions to bring Office to the store in February. Using Project Centennial (Desktop App Converter), Microsoft wants to transition Office away from mobile apps, at least on Windows 10.

A Windows Store version of the suite was confirmed when Microsoft launched Windows 10 S. The OS is designed to compete with Google’s Chrome OS. Office is a major differentiator because users can download the apps from the Store and use the suite offline. With Chrome, users must be connected to use the apps.

Microsoft is using its own Project Centennial to show developers how easy it is to convert their desktop apps to the Windows Store. It is hoped dev’s will do so and boost the viability of the Store.