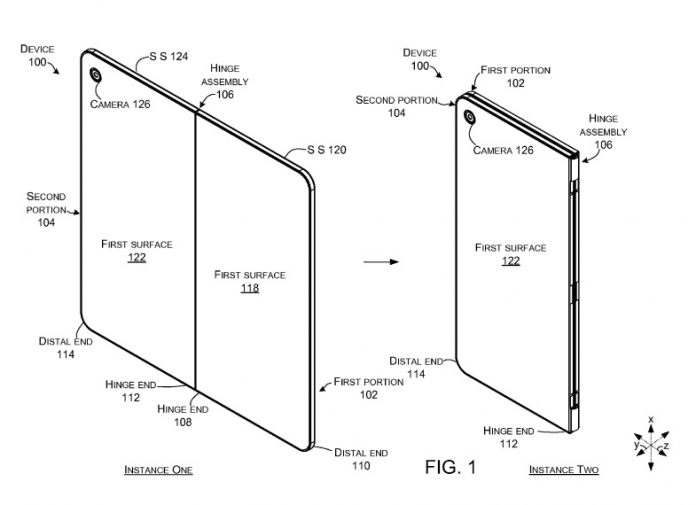 While many have discussed the possibility of Windows 10 Mobile being killed off, Microsoft has always denied this. The company has continued to support the platform. Recent events have also supported this claim, including hints of a return to making mobile hardware. A Windows patent shows us how Microsoft envisions the smartphone of the future.

Before getting to the patent itself, there is context behind it. Microsoft CEO Satya Nadella has said recently that the company will re-enter mobile hardware, but will redefine the space. Nadella claimed Microsoft’s next smartphone may not look like a phone at all.

This was later backed up by HoloLens chief Alex Kipman, who suggested the future of mobile is mixed reality. One thing is clear, Microsoft believes the only way to succeed in mobile is to go bold and innovative.

Looking at the patent, the proposed Windows device would certainly fit that ambition. It shows Microsoft’s plans for a foldable smartphone, which would employ hinges to open like a tablet.

To be clear, this would not be a foldable glass device, like Samsung has been playing with. Instead, it would look and feel like a 2-in-1 smartphone. This is interesting, because it corroborates rumors that Microsoft is interested in this type of device.

The patent shows a device with three different modes. That first is zero degrees, which is a closed state that would work like a normal smartphone. Next is 180 degrees, which would make it flat like a tablet. Lastly, 360 degrees would see the device open and folded on itself. This could be the screen sits on both sides of the handsets.

Before continuing, it is worth remembering that this is a patent, not a real device. While it is possible Microsoft is pursuing this avenue of hardware, there are no guarantees this device will ever be made.

The big question is whether a handset like this could be successful? A device that turns from smartphone to tablet could work, but only if Microsoft can keep the size and weight down. First and foremost, it will need to function as a smartphone. It still feels to me like the tablet would be a gimmick, especially as that particular market is in decline.

360 degrees is where the mystery lies. A device with a screen on both sides seems almost pointless. It would mean one screen is always facing towards the user, making it useless. We have heard rumors the upcoming Apple iPhone 8 will employ a two-screen design, but I don’t believe those stories.

If Microsoft presses ahead with such a vision, it will be very interesting to see how the company can make it work.

Certainly, the company has been dreaming of such a product for years. Check out the concept video above (2:00 on), which shows how a folding all-screen smartphone could look. Microsoft presented this concept back in 2009.