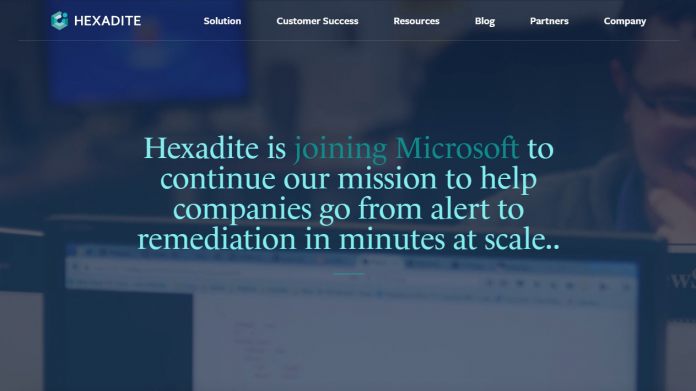 Microsoft signed an agreement on Thursday to acquire next-gen security company Hexadite. Though the Redmond giant has not disclosed terms, it says it will “build on the successful work Microsoft is already doing to help commercial Windows 10 customers detect, investigate and respond to advanced attacks on their networks.”

It will do so through integration with Windows Defender Advanced Threat Detection, which uses AI-based automatic investigation. With Hexadite’s help, WDATP will expand to support endpoint security automated remediation.

In essence, it identifies lesser problems, while flagging big issues for further investigation. All of it is built on a machine learning platform trained on distinguished cyber analysts.

“This serves as validation of all the team has done to create something truly amazing in the market,” said Hexadite’s Marketing VP, Nathan Burke. “It also means that the technology is going to be used worldwide by hundreds of millions of people as part of Microsoft’s security portfolio.”

Hexadite began as a very small team, growing over the period of three years to be highly respected in its industry. It sees this acquisition as a step towards spreading its technology across the world.

Its HQ is based in Boston, and its researchers in Tel-Aviv, Israel. Microsoft plans to absorb the company into its Windows and Devices Group once the deal closes.

“Our vision is to deliver a new generation of security capabilities that helps our customers protect, detect and respond to the constantly evolving and ever-changing cyberthreat landscape,” said Terry Myerson, the head of that group. “Hexadite’s technology and talent will augment our existing capabilities and enable our ability to add new tools and services to Microsoft’s robust enterprise security offerings.”

According to TechCrunch, Hexadite received $100 million for the acquisition. This information comes from unnamed sources and has not yet been verified by Microsoft.